Suspect Wanted for Murdering Another Man, Disposing of His Body in Covelo Captured by New Hampshire State Police »

Vomitous news for Humboldt: Clam Beach, a perpetual contender, has clawed its way up to second place in the hall of shame, after weekly testing showed an almost constant presence of the germs. The only dirtier spot, Heal the Bay says, was a beach near the Santa Cruz wharf.

Why so gross? Heal the Bay points the finger at changes to Strawberry Creek and its tributaries, which wend their way from Dows Prairie down to the beach. Used to be, the report card claims, that a beaver dam in the river held back the waters of the creek long enough for natural processes to do away with some of the sewage leakage from shaky upstream septic systems. For whatever reason — maybe because they were sick of McKinleyville’s shit — the beavers moved out. 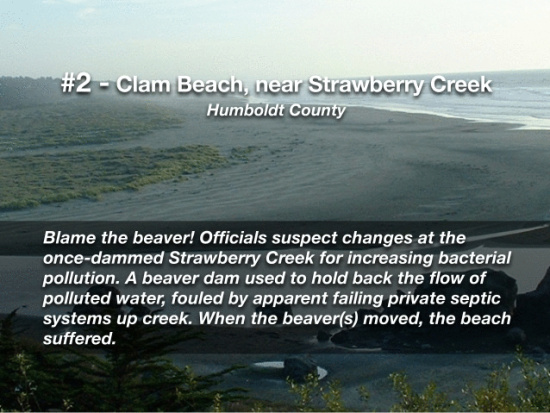