YOUR WEEK IN OCEAN: Women Surfers to Coastal Commission — Bros Don’t Own Mavericks! 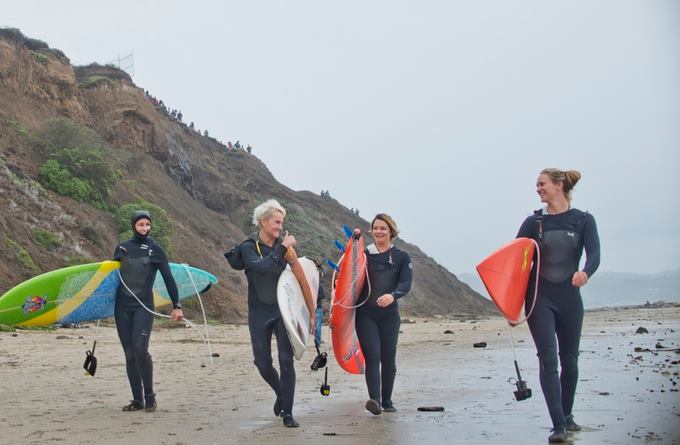 Another wave of controversy is hitting the California Coastal Commission, and this time it is quite literally a wave. The wave is Mavericks, one of the most notorious big-wave spots of all time, and the controversy is that women have never been invited to partake in the big-wave surf contest, the Titans of Mavericks, held there. This year all that could change, as a group of top women big-wave athletes have formed a group called the Committee for Equity in Women’s Surfing (CEWS), and are asking for their own division in the Titans of Mavericks and any surf competition held at Mavericks in the future.

Held since 1999, the Titans of Mavericks is considered to be one of the most coveted events in big wave surfing, and only runs when conditions are just right. Although the contest has always been open to women, one has yet to crack the elite top 24 athletes who are invited to participate.

As of last year, any surf contest held at Maverick’s needs a permit approved by the California Coastal Commission to access the offshore surf area, beach, and nearby parking lot. CEWS has submitted a proposal to the commission, requesting they make hosting a corresponding women’s division a precondition to receive the permit to hold a surf contest at Mavericks.

Among the women making up the committee are four of the biggest names in women’s big wave surfing — Bianca Valenti, Paige Alms, Keala Kennelly and Andrea Moller. These four women along with countless others are a testament to how far women’s big-wave surfing as a sport has progressed in recent years.

The ocean does not discriminate based on gender, ethnicity or sexuality. Men and women alike risk their lives surfing big waves every day, and all seek the chance to showcase their talent and hard work. Mavericks is recognized as the pinnacle of big wave surfing; providing women with their own heat in the Titans of Mavericks contest would give them the hard-earned opportunity to prove and perform their talents on the same playing field as the men.

The commission will discuss the proposal at their hearing, November 2-4. Their decision will set a precedent for the future inclusion of women in big-wave surfing contests, and for equality of women athletes in general. The World Surf League (WSL) has already embraced the inclusion of women athletes in the 2016/17 WSL Big Wave Tour, with contests scheduled for Pe’Ahi, Maui and Todos Santos, Mexico.  The question is, will California will join the growing movement of supporting women in their quest to showcase their talent and pave the way for equality in surfing for future generations.

To support the Committee for Equity in Women’s Surfing:

Want more information? Check out articles on The Inertia HERE and the Monterey Herald HERE.