In April, the Eureka City Council approved a temporary homeless village at the corner of Third Street and Commercial. Its proponents — Betty Chinn and the Humboldt Coalition for Property Rights — built it up quickly, using shipping containers for homes, and it’s been housing folks there ever since.

But it came with a six-month time limit, and six months are almost up. 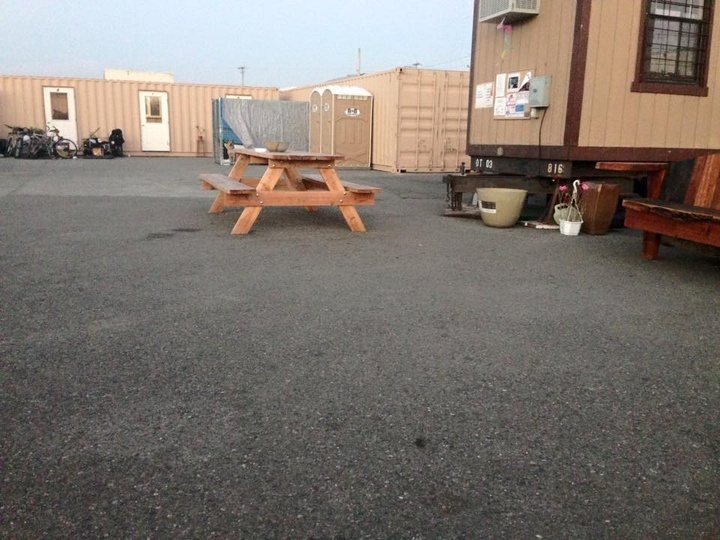 On Tuesday at 4 p.m., the Eureka City Council will hold a special meeting to pick a new site for the container village, which residents now call “Blue Angel Village.” City staff have laid out for options for the council to consider, and are recommending that the city give the village permission to stay for a year.

They’re also recommending that the city approve the Betty Kwan Chinn Homeless Foundation’s request for $75,000 to fund operation of the village.

Among the four sites the the staff is offering up for the council’s consideration, they lean most toward a vacant lot at the end of Marina Way, near the Wharfinger Building. According to the staff report:

The end of Marina Way, south of Dock B, is a lightly traveled, dead-end street bordered by property used by Pacific Affiliates for log and cargo storage. The portion of the roadway nearest Humboldt Bay is used for parking. Water service could be obtained by tapping the main in Marina Way, while power is available at a nearby pole. An electrical service would need to be installed at a cost of approximately $5,000.

The site is attractive for several reasons. First, like Washington and Koster, it is proximate to many services utilized by the occupants of the village. Unlike Washington and Koster, though, there would be no through traffic past the site, which would alleviate some of the privacy concerns that have been generated by the village’s current location. Parks and Recreation proposes to provide programming for occupants of the village from the Bay Room of the Wharfinger Building. Finally, because of the unique configuration of the site, comparatively little fencing would be required, helping to offset the cost of the electrical service.

For these and presumably other reasons, the end of Marina Way is the preferred site for GECOP, as stated in the attached letter of request. Staff concurs with GECOP and recommends that Council select the Marina Way site for relocation of the Blue Angel Village, with a one year term.

Other sites under consideration?

As stated above, GECOP — the “Greater Eureka Community Outreach Project,” the name of the Chinn/HumCPR partnership that runs the container village — prefers and in fact sort of demands the Marina Way site. In its own letter to the council, signed by president Lee Ulansey, he says that the organization will accept the Washington/Koster parking lot in a pinch, so long as neighboring businesses sign off, but will withdraw their support of the project if one of those sites is not chosen, with the conditions named.

The meeting will be held at 4 p.m. Tuesday at Eureka City Hall, 531 K Street, Eureka.