Meet the Volunteer Squad Cleaning Up the Graffitied Streets (and Trees) of Eureka. Then Join Them! 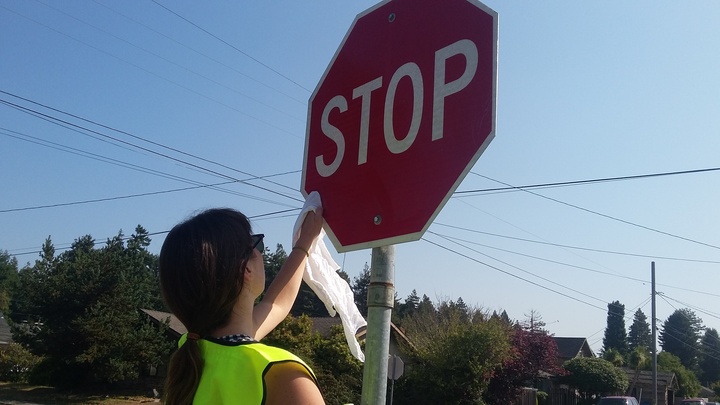 Eureka native Delo Freitas, who works for the the city’s development services department, wipes a stop sign clean at the corner of Everding and T.

Ed Sullivan spent 24 years as a custodian for Eureka City Schools. He knows a thing or two about graffiti. His study of the form has provided him with a vast body of knowledge, one perhaps unequaled in Humboldt County. Name a paint or ink and a surface to deface with it, and he will tell you the proper combination of chemicals and technique to most efficiently make it as new.

You might ask: Sharpies? You can’t remove Sharpie, though, right?

And he will say: One thing a lot of people don’t know is if you scribble over a Sharpie tag with a fresh Sharpie, then the ink will usually wipe right off! A Sharpie is its own solvent!

The thought made Sullivan break out in one of his very large smiles. Retired from the school district for the last two years, making kayaks from kits in his spare time and paddling them around when he gets the chance, he is as ebullient a man as you are likely to meet.

This morning he was driving out to Everding Street in his pickup to meet up with his new crew — the other core volunteers who make up the City of Eureka’s new Graffiti Removal and Abatement Team. Someone had tagged up a stop sign there with some kind of day-glo green paint, and the GR&AT was headed out to abate. Sullivan doesn’t have an official title with the team — he’s a volunteer, like the others — but his colleagues seem to defer to his experience.

Sullivan spends a lot of time traveling these days, post-retirement. He’s one of those people who is busier now than he ever was when he was working. Why did he want to spend his precious free time wiping out graffiti on city streets?

“It’s something I could do!” he exclaimed. 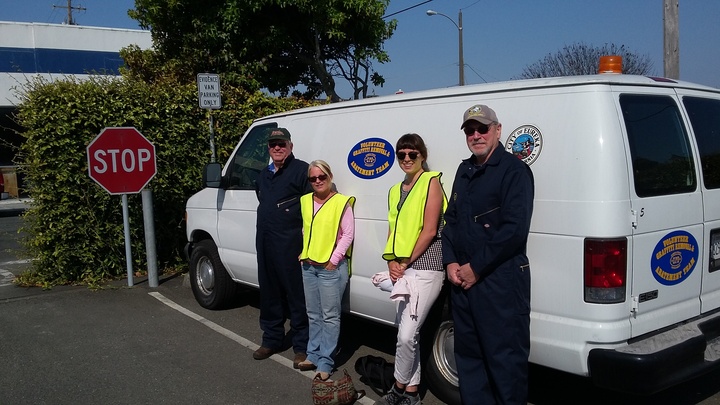 The rest of the team arrived at the corner of Everding and T separately, two of them in a white van that the city loans to the GR&AT for its abatement missions.

When they got there, Sullivan sized up the defaced stop sign and plotted a course of action. In this case, he said, they’d want the pink bottle. Not only would the pink fluid easily remove the paint, but it would not damage the weatherproofing finish on the sign.

And so it was to be. They brought out a stoop for Eureka City Councilmember Kim Bergel to stand on. She climbed up, wetted her rag with the pink stuff and abated most of the tag with ease. Delo Freitas, a planner with the city’s Development Services department, got up to reach the parts that Bergel could not reach. 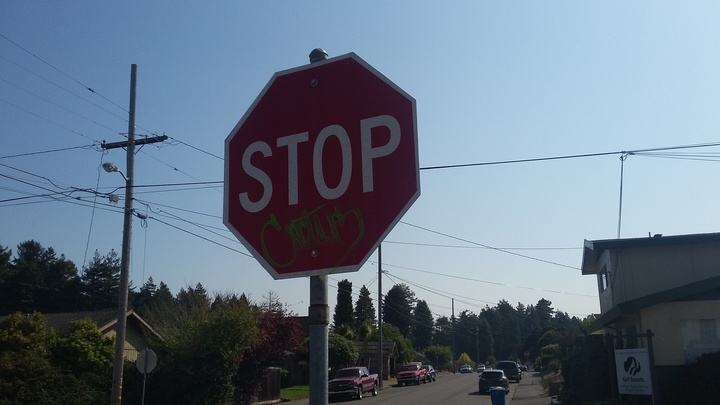 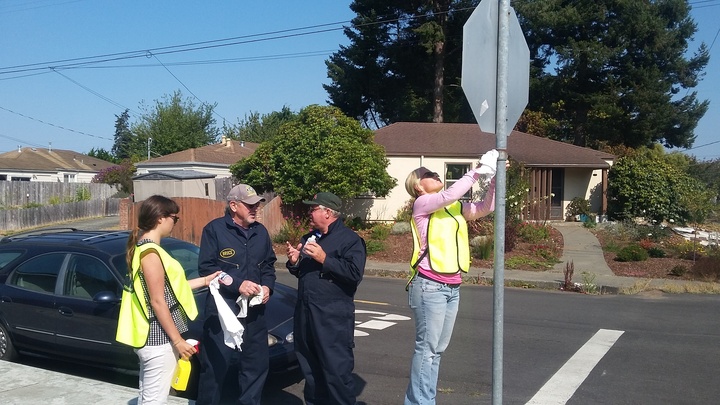 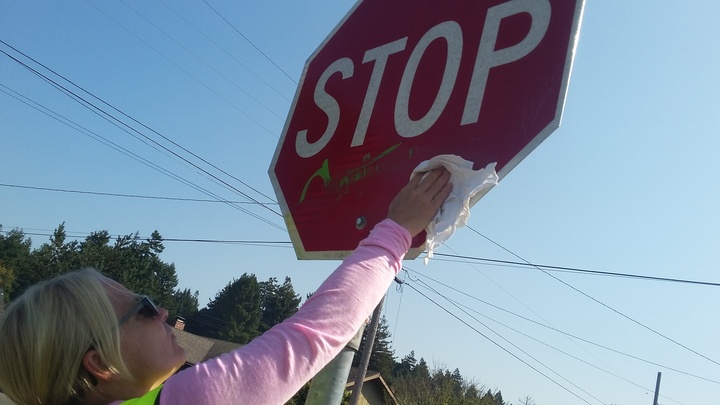 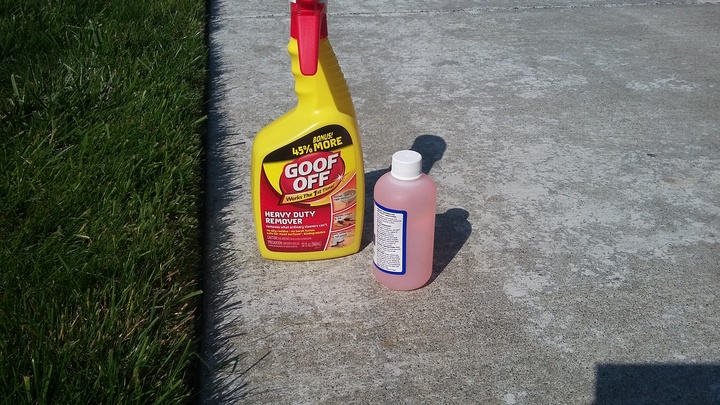 Two of the tools of the trade: Goof Off and the pink stuff.

The whole abatement was over in less than five minutes. As the team wrapped up, a neighbor strolled into the scene.

“This must be the city at work!” the neighbor said. What were they doing? What was going on?

The team explained that they were volunteers working with the city, and they were out cleaning up graffiti on city property. The neighbor said hadn’t even known the stop sign had been graffitied. Was it a gang thing? Sullivan assured him that it was not. Bergel tried to recruit him to the join the graffiti abatement team. (The team is looking for new recruits.)

The neighbor didn’t seem ready to sign up to abate graffiti, but he did take down some phone numbers that Sullivan had ready on a printout. 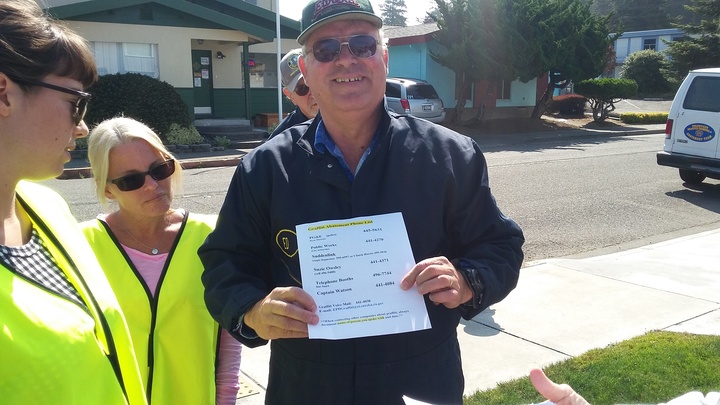 Sullivan carries a printout of good numbers to know. If you see unsightly graffiti on Eureka city property, leave a voicemail at 441-4038. Is the graffiti on a telephone pole? Call PG&E at 445-5631.

Then it was off to the afternoon’s bigger job. Sullivan said that there were as many as seven spots they needed to erase at Highland Park. The park had been hit multiple times by the same set of very annoying and malicious taggers.

On the ride over, the Outpost asked: What was the strangest piece of graffiti Sullivan has ever abated, in his long and distinguished career? He thought about the question.

“There was one on the gym that we almost hated taking off, because it was beautiful,” he said, in a little bit of a reverie. “Some of these things are art.”

The Graffiti Removal and Abatement Team works almost exclusively on city-owned property, though Sullivan said they might provide assistance to elderly homeowners who don’t have the means to remove graffiti themselves. The team is armed with a multitude of pains, solvents, brushes, rags, rollers and the like, most of it donated or sold at low cost by local businesses and organizations. (They wished to shout out, in particular, the Humboldt Waste Management Authority, PPG, Allpoints Signs, Shafer’s Hardware and a few more I didn’t catch because my pen wasn’t moving fast enough.)

Sullivan pulled up to Highland Park and surveyed the damage. It was quickly apparent that the worst of it came from a guy who was going by the name of “Jimmy K.”

“Jimmy K,” Sullivan sighed. “This guy I would love to catch.” 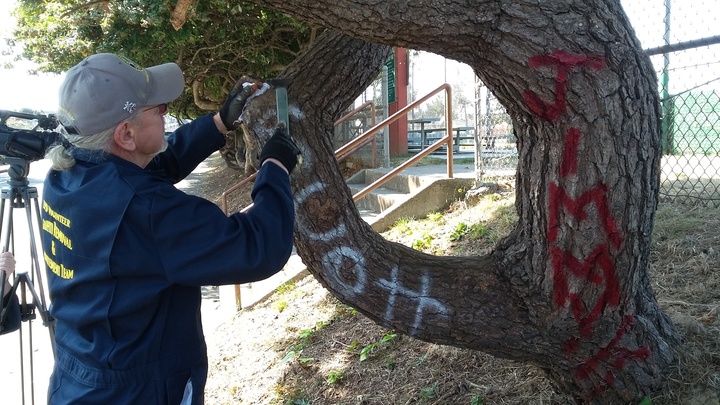 GR&AT volunteer Bruce Seivertson, a retired geography professor from Cal Poly, starts in on the handiwork of “Scott” and “Jimmy K.” Below: Bergel. 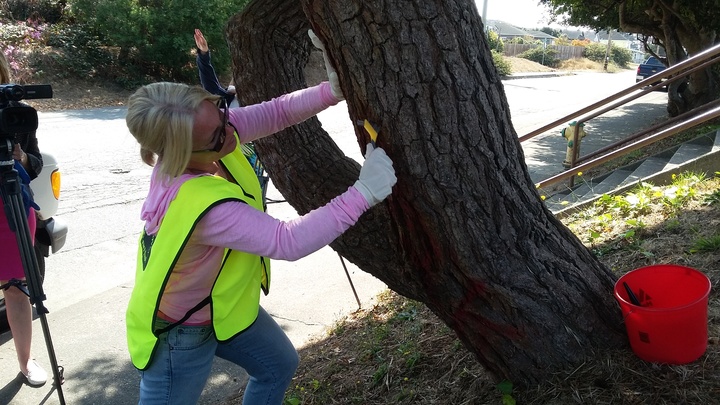 One thing about Highland Park: The taggers there seem most excited about tagging the trees, of all things. “Jimmy K” made his mark on no fewer than three of the trees lining the park along Glen Street.

Sullivan didn’t have any shortcuts for this one. Bergel and Bruce Seivertson, a retired Cal Poly geography professor and current president of the Timber Heritage Association, grabbed wire brushes and started in on the bark of one of the trees, which both “Jimmy K” and his less prolific colleague “Scott” had tagged up. Sullivan moved over to the Highland Park ballfield, got down on his hands and knees and began working the concrete pad that the bleachers rest on.

Delo Freitas walked north up Glen Street and started working on a telephone pole that had some very old paint on it. Today is her day off at the city, where she works in the economic development department. As she brushed and scraped away the tags from the telephone pole reflectors, she talked with a reporter about her work and about the park. She grew up a couple of blocks away from where she was standing, it turned out, and she still lives close by now.

“This has been my park since I was a kid,” she said.

Highland Park is a beautiful park with a bit of an unsavory reputation. What it needs, Freitas said, is more use. And you can imagine it. Blink your eyes and you can see the kids in the playground, the baseball going on in the baseball field, the families picnicking on the grass. 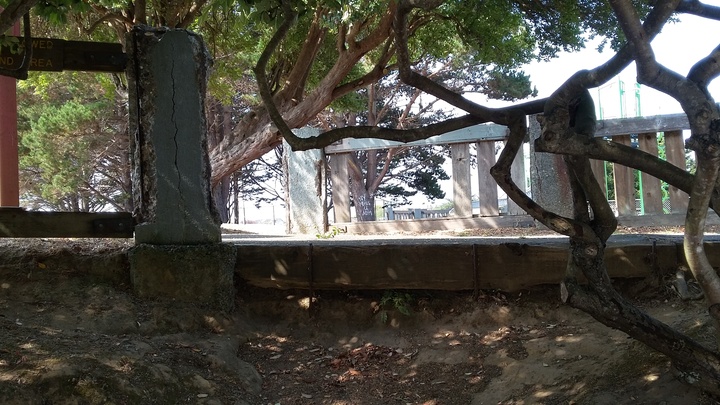 Another tagged tree, deeper inside the park. Below: Close-up. 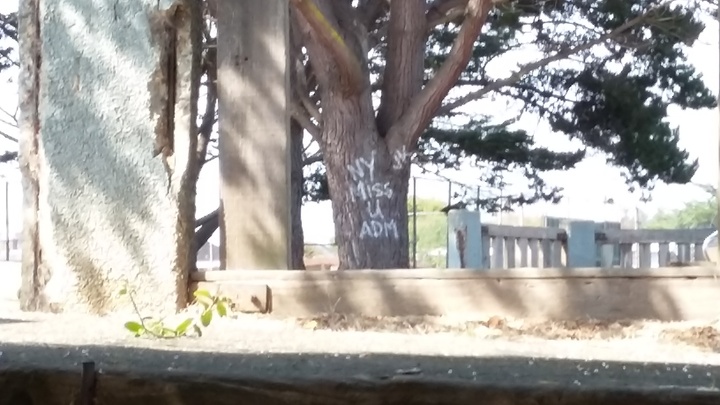 Meanwhile, after a half-hour or so of wire brushing, during which they reluctantly brought out some solvent to apply to the tree, Bergel and Seivertson had gotten about as far as they were going to get with Jimmy K and Scott, his neighbor in taggery. They were about to head over to the next tree. But Bergel, who again attempted to recruit passers-by as the abatement was underway, was thinking.

Wouldn’t it be great, she asked, if some middle schools or high schools could volunteer some time to this, as part of a service project? The GR&AT, Seivertson had said, is currently planning to go out once a week, to keep the pace set by the city’s volunteer Abandoned Vehicle Abatement Team. 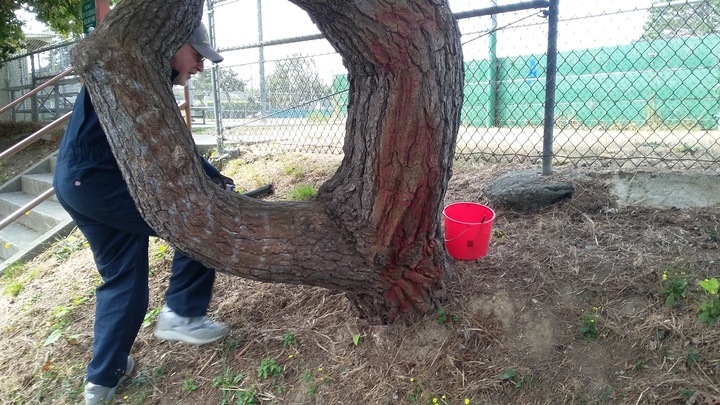