All Things Fire: The Latest on Humboldt’s Surrounding Wildfires 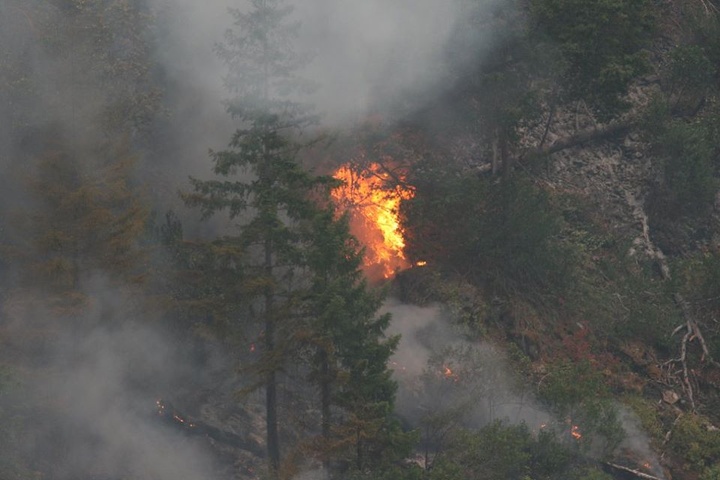 Fire burning below Ukonom Creek. Taken next to Highway 96, looking east across the Klamath. Photos by Jeanette Courtney.

A series of wildfires sparked by recent lightning storms continue to burn to the north, east and south of Humboldt County.

The Orleans Complex fire, burning northeast of Humboldt in the Klamath National Forest, has been divided into east and west zones by firefighters.

The southern area of the Klamath River drainage, including Hoopa and Willow Creek, will continue to see hazy skies and moderate smoke conditions.

The Clear Fire was ignited by a thunder storm on July 25. The Forest Service expects to fire to be contained by October 1.

The fires are burning near the Humboldt-Trinity border, east of Zenia, along the east end of the North Fork Ell River.

The U.S. Forest Service reports that airplanes will be scooping up water at Ruth Lake during the next few days to help extinguish the Ruth Complex. The forest service advises lake goers to please listen to all safety precautions from fire team or Sheriff’s Office while water scooping operations take place.

Read more about these fires from the U.S. Forest Service below:

The Haypress fire, located in the Marble Mountain Wilderness near Wooley Creek, was the most active fire in the Orleans Complex. Haypress grew to almost 131 acres. Several cabins in the wilderness are currently threatened, crews will be working on structure protection around the historic buildings and trail bridges.

The Ten Bear Trailhead leading to the Marble Mountain Wilderness is closed. Hikers wanting to access the wilderness should contact the Orleans Ranger District Office at 530-627-3291 or Orleans Complex Fire Information for details on affected trails.

A Temporary Flight Restriction Area (TFR) has been set over the Orleans Complex to provide a safe environment for firefighting aviation operations.

A portion of the Happy Camp Ranger District, in the vicinity of the Ukonom Fire, is closed to public entry for the duration of the fire due to the risks associated with an active wildfire.  The closure stretches from the east bank of the Klamath River east to the Independence Creek Road and includes Ukonom Creek.  Please review Klamath National Forest, Emergency Closure order number 17-05-797 for complete details at https://inciweb.nwcg.gov/incident/article/5433/37176/.

Motorists traveling on State Highway 96 are reminded that there will be large amounts of fire traffic. Please drive with caution.
On the Lower Trinity Ranger District there are five small fires that the public may see as they travel along Forest Route 1. Those fires are Potatoe, Bennett, Happy, Groves, and Hennesey.  There is very little fire activity on any of those fires. Those fires are located north and south of Highway 299 along Forest Route 1.

The Dutchman and the Secret Fires are located south of Ruth Lake and north of Shannon Butte. Today on the Dutchman Fire, firefighters will focus on constructing and strengthening containment lines. Crews are also protecting a structure on the north side of the fire. The Secret Fire has not increased in size for two days. Crews expect to complete mop up operations today.

The Willie Fire began east of State Route 502 and south of Packwood Flat, in the North Fork Wilderness. Fire behavior has been moderate with short runs up slopes and spotting. The fire continues to spread eastward and has reached the northwestern edge of the Yolla-Bolly Middle Eel Wilderness. Today crews will rely on helicopters to assist with containment activities along the eastern and northern portions of the fire. Structure protection firefighters will are protecting the line cabin on the southern side of the fire.

The Spout Fire is located southeast of Ruth Lake. Crews have successfully contained this fire and will monitor the area for the next several days.

Due to ongoing aerial operations, a Temporary Flight Restriction (TFR) has been imposed over the Ruth Complex. This means all non-operations related planes and drones are not allowed within the TFR. In the next few days the Ruth Complex will be using planes on Ruth Lake that can scoop up water to help with the firefighting operations in this complex. Visitors to Ruth Lake, please listen to all safety precautions from fire team or Sheriff’s Office while these scooping operations are taking place.

The Young Fire on the Gasquet Ranger District is in the Siskiyou Wilderness. We have limited staffing on this fire due to the steep terrain and the many hazardous trees. Our is to confine the fire within the wilderness.  The fire will be monitored to ensure that it remains in the wilderness. The Klamath National Forest has the Prescott Fire just southeast of the Young Fire in the Siskiyou Wilderness so wilderness visitors are being advised to be aware of those fires and avoid those areas.

The Six Rivers National Forest remains under fire restrictions to provide for public and resource safety. Building, maintaining, attending or using a fire, campfire, or stove fire, is prohibited except in designated areas, details about these restrictions can be found on the Forest website at www.fs.usda.gov/srnf.

For more information about the Ruth Complex or the Six Rivers National Forest, go to https://inciweb.nwcg.gov/incident/5492/, www.fs.usda.gov/SMF, www.facebook.com/USFSSixRiversNF, www.twitter.com/SixRiversNF.

There is always the risk of starting a wildfire. For more information on how wildfires can be prevented, remember “One Less Spark, One Less Wildfire” and visit http://preventwildfireca.org/OneLessSpark/

A lightning storm early in the morning of July 25, 2017 left fires on the Happy Camp Oak/ Knoll Ranger District of the Klamath National Forest. Five of those were combined as the Clear Fire, located in a steep heavily forested area along the south fork of Clear Creek, seven miles southwest of Happy Camp. The fire is being managed by a Type 3 incident command team.

Firefighting strategies take into consideration the salmon streams, owl habitat and areas of concern for native peoples. Current fire activity is limited to consumption of fuel inside the containment lines.