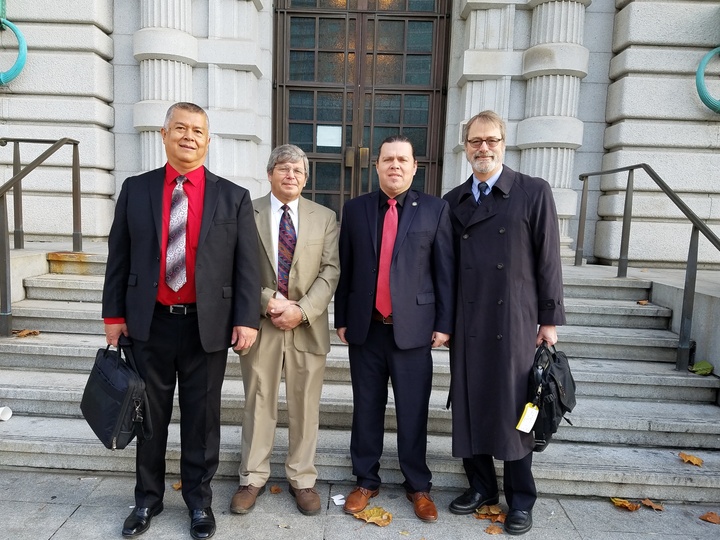 A federal judge today ruled that federal regulators must push more water down the Klamath River in order to combat a deadly parasite that kills juvenile salmon in the springtime.

Specifically, Judge William H. Orrick ruled that the federal Bureau of Reclamation, which manages the dams and diversions on the river, must provide two sorts of emergency water releases in order to combat the C. shasta parasite, which in recent years has killed multitudes of juvenile fish in recent years — including the threatened coho salmon, which is protected under the Endangered Species Act.

Orrick’s ruling — which was delivered via summary judgment, without need for a full trial — ordered regulators to release a strong pulse of water every year in the winter in order to disrupt the lifecycle of the worms that host the C. shasta parasite. If the worms are brought to heel, the parasite’s presence and ability to attack young salmon will be greatly impaired, biologists believe.

In addition, the ruling ordered regulators to release emergency flows of water from the upstream Klamath Project in the event that levels of C. shasta infections reach 30 percent or greater in young fish. These emergency releases would be aimed at diluting the concentration of the parasite at times when its threat to the juvenile salmon is greatest.

The ruling was made directly in response to a suit brought by the Hoopa Valley Tribe last year, but according to tribal fisheries director Mike Orcutt it also consolidated similar petitions brought by the Yurok Tribe, the Pacific Coast Federation of Fishermen’s Association and Klamath Riverkeeper.

“The Hoopa Valley Tribe depends on salmon for our livelihood and will not stand idle while our people’s culture is jeopardized” said Ryan Jackson, Chairman of the Hoopa Valley Tribe in a press release reprinted below. “This decision is a win for the tribe and all communities that depend on Klamath salmon.”

A U.S. District Court judge ruled today that federal agencies must take preventative and emergency measures to reduce the incidence of disease among juvenile salmon, the major source of mortality limiting runs of returning adults to the Klamath River and its tributaries.

This decision was welcomed by the Hoopa Valley Tribe, who initiated the lawsuit challenging the federal government’s inaction given two years of high disease rates and poor adult returns. “The Hoopa Valley Tribe depends on salmon for our livelihood and will not stand idle while our people’s culture is jeopardized” said Ryan Jackson, Chairman of the Hoopa Valley Tribe. “This decision is a win for the tribe and all communities that depend on Klamath salmon.”  In his ruling, Judge Orrick directed the Bureau of Reclamation to implement flow measures that were developed by the Tribe and supported by the best available science.

These include having more frequent peak flows and higher spring flows that are the components of a more natural hydrology for the Klamath River. “These peak flows and spring flows are intended to reduce unnaturally high levels of parasites and protect juvenile fish in the mainstem Klamath River” said Mike Orcutt, Fisheries Director. “Given the poor runs in recent years, this will provide a much needed rebalancing of water towards the needs of the fish”. Last year’s fall Chinook salmon run was one of the lowest in recent history.

Salmon protections proposed by the Tribe will remain in place until the federal agencies revise their flows in accordance with new information. “The Tribe remains vigilant and will continue fighting for the fish” said Jackson.