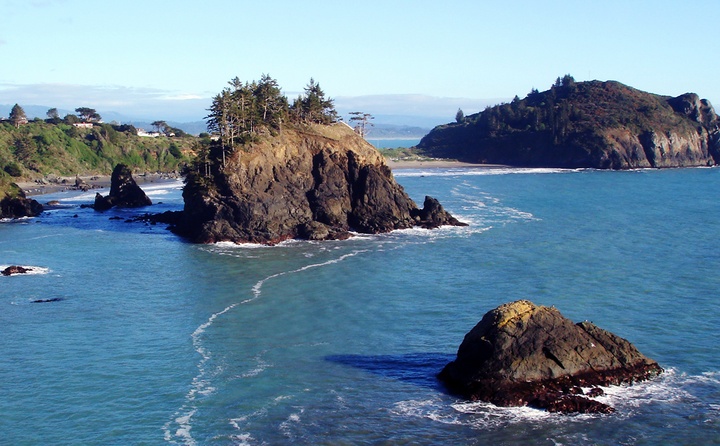 Trinidad Head (on the right) is one of three sites in Humboldt County to be added to the California Coastal Monument. | Wikipedia Commons.

Press release sent to the Outpost by Ben Morehead of the Trinidad Coastal Land Trust:

Today elected officials, business and tribal leaders in Humboldt County celebrated the news that President Obama expanded the California Coastal National Monument to include three new sites in Humboldt County and three others in Santa Cruz, San Luis Obispo, and Orange Counties. The California Coastal National Monument stretches the length of the 1,100 mile state coastline and includes thousands of rocks, islands and geological formations as well as 1,665 acres of public lands in Mendocino County.

“Nothing could be more important at this time than to protect our national treasure and resource, the California Coastline,” said Julie Fulkerson, former mayor of the City of Trinidad in Humboldt County. “Our children and future generations depend on us to have the wisdom to plan ahead and provide protections for our fragile environment and coastal habitat.”

Support from Native American tribes from up and down the state has been incredibly strong, with the news of today’s designation, Trinidad Rancheria representative Shirley Laos said “Trinidad Head is a sacred and spiritual spot for the Yurok people and most of our members are of Yurok descent. It’s part of the spiritual landscape of our people. Our property is the access point to the Head and we would be happy to be involved with any projects or upgrades.”

The Monument expansion also has the support from the Wiyot Tribe whose traditional homeland makes up the Lighthouse Ranch BLM property. “The Wiyots will always stay true to protecting what the Creator and our ancestors left us,” stated Ted Hernandez, Wiyot Tribal Chairman.  “This is not just for us, but for all our neighbors and friends who call this area home.  We have a special relationship to this land that has developed over thousands of years, and it is our job to preserve these areas for our future generations.” The Wiyot Tribe made a request to the White House to add the name ‘Waluplh’ in order to better reflect the cultural and historical significance of the land, as well as recognition for the Wiyot Tribe and language.

The national monument includes the Lost Coast Headlands, Walumph-Lighthouse Ranch and Trinidad Head, about 460 acres in Humboldt County. The Trinidad Coastal Land Trust is a local non-profit active in the campaign to support this designation. Executive Director Ben Morehead said in a statement today “it is an honor that three out of our state’s five newly designated on-shore California Coastal National Monument areas are in Humboldt County. All of the areas have nicely maintained public trails with amazing ocean views. I hope that the communities living and working here will benefit from the resource management, economic and tourism opportunities that this national monument designation will offer.”

The other areas include Piedras Blancas Outstanding Natural Area in San Luis Obispo County; Cotoni-Coast Dairies in Santa Cruz County; and Orange County Rocks off the coast of Southern California.

Chambers of Commerce and businesses in the coastal communities also heralded the expansion of the National Monument as a boost to local economies. In total, 16 Chambers of Commerce, 11 tourism boards and business owners up and down the coast endorsed the effort. Business leaders point to the 2014 expansion of the California Coastal National Monument to include the Point Arena-Stornetta Public Lands in Mendocino County as an example of the value of this type of designation. That community has experienced a revitalization since the designation, including the opening of new businesses locally.