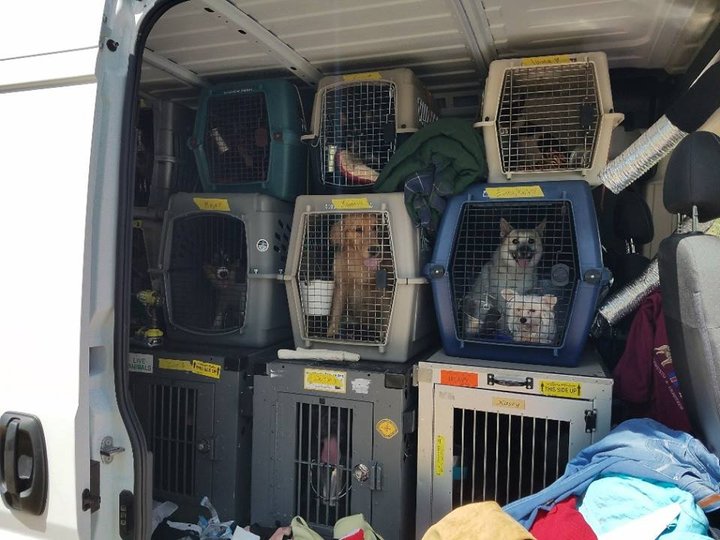 The dogs were found locked away in the hot abandoned van | RPD.

On June 6, 2018 at approximately 1:22 PM, Redding Police Officers were dispatched the In-N-Out restaurant on Dana Drive in regards to a stolen vehicle. Officers arrived and spoke to Anthony Carter, 55 years, of Kent Washington. Carter said he was transporting 14 show dogs of various breeds from Washington enroute to Vallejo, California for a dog show.

The dogs belonged to several different owners. Carter and the two other passengers went inside to order food and left the vehicle parked, unlocked and running to keep the air-conditioning on for the dogs. The vehicle was a 2018 Dodge ProMaster Cargo Van with Washington license plates.

An unknown white male adult subsequently stole the vehicle while it was left unattended. Several officers began searching the area for the vehicle. Surrounding agencies were notified along with the California Highway Patrol Air Operations Division. Redding Police Investigators also responded to the scene and assisted with the investigation.

On June 7, 2018 at approximately 10:28 AM, a citizen called to report possibly seeing the listed vehicle in a wooded area off of Canyon Road in south Redding. Officers responded and located the vehicle, locked, not running and unattended. Officers could hear several dogs barking inside.

Officers broke a window to gain access into the vehicle. Thankfully, all 14 dogs were located inside and were turned over to Animal Control Officers with the Haven Humane Society to be checked out and to be reunited with their owners.

The investigation is ongoing to determine who is responsible for the theft of the vehicle. If anyone has information as to the identity of the suspect(s), contact the Redding Police Department at 530-225-4200. We would like to remind citizens to lock their vehicles, when left unattended and do not keep valuables inside, whenever possible.