GOLDBERG TRIAL, DAY SIX: The Victim’s Son and a DA Investigator Testified Today, Along With a Man Who Was Flipped Off By Murder Suspect on the Day of the Shooting » 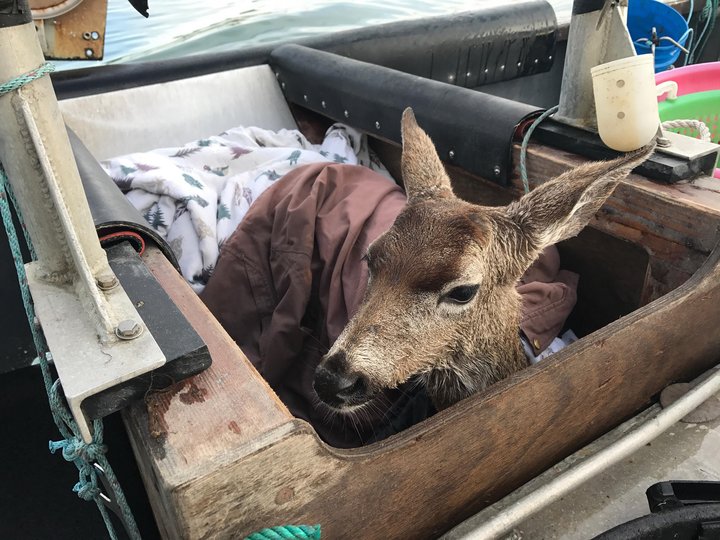 Late this afternoon, the crew of the Josie L was headed back to port after a day of crabbing when they spotted something in the water, some sort of animal swimming between the south and north jetties that frame Humboldt Bay’s bar crossing.

“We didn’t know what it was,” Captain Dale Lindstrom told the Outpost. “We thought it might have been a dog.”

As they got closer they could see that the creature was struggling to stay afloat in the choppy waters. They pulled the boat closer and the crew soon recognized the animal as a young deer — a buck, judging by the antler nubs getting ready to emerge from his head. They pulled the boat around as the young buck approached the rocky edge of the north spit.

“It was kind of weird — like the thing knew it was in big trouble — it swam right to the boat,” Lindstrom said. “My guys grabbed it and wrapped it in a blanket.”

They placed the rescued deer in a hold on the deck and began warming it up. “It’s just shakin’,” Lindstrom said as the Josie L continued back to the Woodley Island Marina. “It’s real tired.”

If their boat hadn’t been passing through at the time, Lindstrom says there’s no way the young buck would have survived.

The deer doesn’t appear to be hurt, so Lindstrom released the animal on Woodley Island, following advice from staff at the local office of the California Department of Fish and Wildlife.

Dale Lindstrom and his rescued passenger.

You’re free! Stay out of the water, dummy!