State May Push Cities and Counties to Draw ‘Fairer’ Districts »

Some Poetic Soul Tried to Plant a Redwood Tree in Arcata’s Old McKinley Statue Plot, Which Sits Above a Mound of Solid Granite 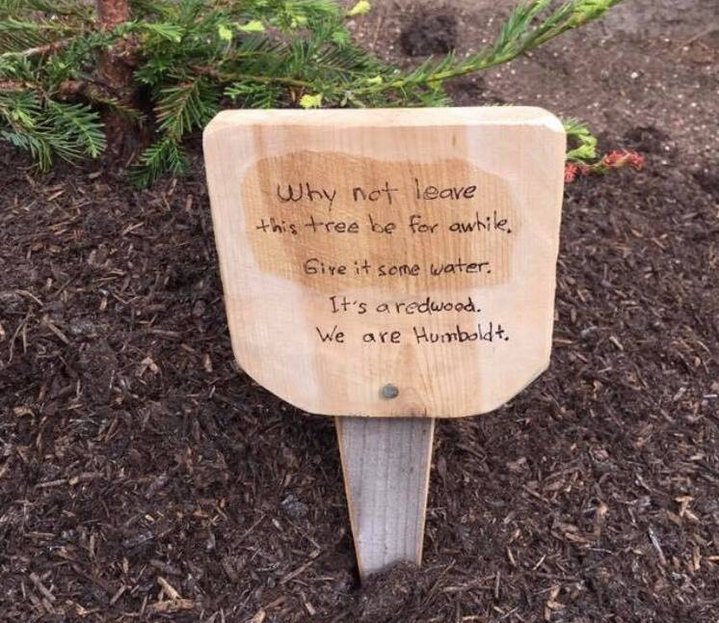 An unknown person took it upon themselves to fill the statue-sized void in the heart of the Arcata Plaza by planting a young redwood tree in place of old Bill McKinley last week.

A mysterious sign was also stuck into the shallow planter, which has sat empty since the McKinley statue was removed in February.

“Why not leave this tree be for awhile,” the sign read. “Give it some water. It’s a redwood. We are Humboldt.”

Arcata City Manager Karen Diemer told the Outpost this afternoon that workers easily removed the tree on Sunday, as the unknown person left it planted inside a five-gallon bucket and simply piled a mound of dirt around it.

Diemer said that the soil in the planter is only a few inches deep, as it sits atop a layer of concrete and a granite staircase.

The Arcata Plaza Improvement Task Force is scheduled to present the City Council with a list of plaza improvement recommendations in the fall, which will include suggestions on how to use the space once occupied by the McKinley statue.

While it’s currently impossible, Diemer would not rule out the idea of planting a redwood at the center of the plaza if the planter and staircase were removed.

As for the redwood that was placed there last week, Diemer said the city will attempt to save the tree and plant it elsewhere if possible.

A layer of concrete covers the granite staircase beneath the Arcata Plaza planter. | Outpost file photo.