Press release from the office of Sen. Mike McGuire:

It’s been an exciting seven months for the Great Redwood Trail, which will convert a decaying railway into a world-class destination for hikers, cyclists and nature lovers here at home and from across the globe.

Stretching from San Francisco Bay to Humboldt Bay, the proposed trail is a spectacular opportunity to open up some of the most beautiful landscapes on earth and be a significant economic driver now and for years to come.

Tens of millions have already been secured for planning and development of the trail and Senator McGuire will be hosting an interactive Town Hall in less than two weeks tomorrow, which will help bring the long-term vision for the Great Redwood Trail into focus.

Audience members are encouraged to participate, ask questions, and will have a chance to discuss their priorities for the Trail. There is a lot going on right now, so come and hear the latest!

The Humboldt Trails Council will also be holding their 3rd annual Humboldt Trails Summit at the same location, just before the Town Hall. Doors will open at 9:30 am and local trail supporters and agencies will be staffing tables with information on the multiple local trails that have been built or are in the planning stages and need support. Everyone is invited to engage about these projects and there will be an update on them at 10 am by Hank Seemann, Humboldt County’s Deputy Director of Public Works.

“The momentum for the Great Redwood Trail is really starting to build,” Senator Mike McGuire said. “Over $30 million has been secured this year to develop critical trail segments. The long standing NCRA lawsuit, which had gone on for way too long, has been settled and we secured an additional $3 million that will be put to work to wind down NCRA and formally kick off the all-important master planning process for the Great Redwood Trail.”

The Trail will replace the crumbing railroad on much of the 300-mile-long track, and will become a significant economic driver for the rural North Coast communities it winds through. California’s outdoor recreational economy is one of the fastest growing economic sectors of the Golden State. It generates over $92 billion a year, is responsible for nearly 700,000 jobs, over $30 billion in wages, and brings over $6 billion in tax revenues back to state and local communities. Once completed, the Trail will attract hundreds of thousands of locals and visitors alike to hike this spectacular landscape and inject needed funds into the greater North Coast region. 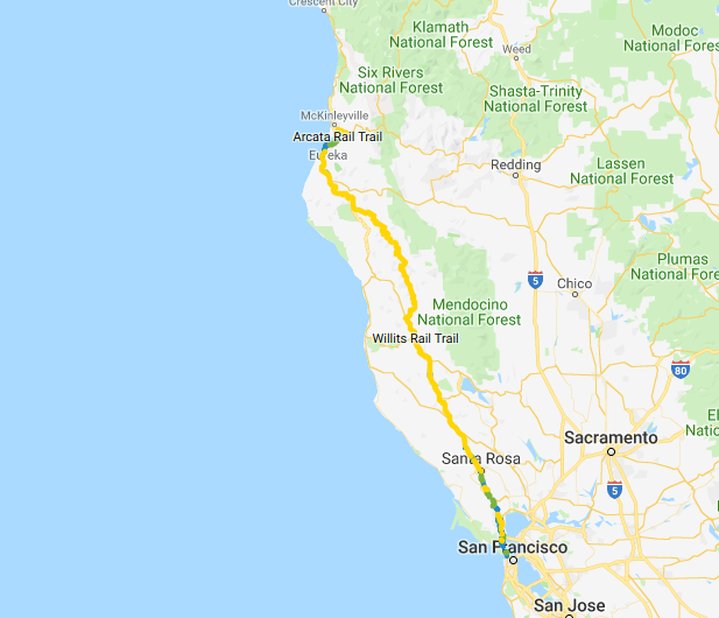 Check out the interactive map @BrianBicycles made of actual progress on the Great Redwood Trail so far at this link.