What Are You Going to Do With All That Weed? Enter Some in the Emerald Cup »

Your Week in Ocean: “It Was The Worst Thing I’ve Ever Seen” 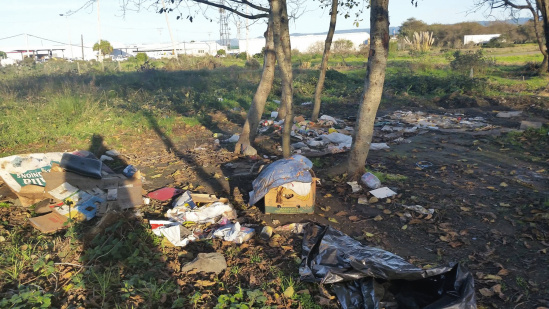 Scene from the foot of Del Norte Street by Aaron Ostrom.

Most everyone agrees that trashing Humboldt’s beaches, rivers, bay, wetlands and other waterways is a bad thing. But a vast divide lies between cleaning up after partiers, illegal dumpers and generally lazy people, and in facing the problems created by homeless camps. The latter brings up not only environmental concerns, but also issues of social inequity and county resources – what do we do as a community for people too poor, ill or addicted to maintain a housed way of life?

This ongoing issue came up again yesterday when PacOut Green Team leader Aaron Ostrom posted to Facebook his dismay at an attempt to clean up around the foot of Del Norte Street in Eureka:

When we arrived, I couldn’t believe my eyes. I couldn’t believe what I was looking at. It was tent city! I was very nervous about walking on the trail that the city invested in, but we did. I counted over 100+ shelters on that little peninsula. Within the 100+ shelters, the trash was insane! I felt like I was in a 3rd world country. Huge numbers of vagrants, dogs running around (several of them were German Shepherds and Pit Bulls). A lot of the dogs were limping, in obvious pain. I saw waterways that lead out to the bay being used as toilets, huge amounts of garbage everywhere, lots of it was finding its way to the bay. It was the worst thing I’ve ever seen and I couldn’t believe that the city appears to be turning its back on this.

This isn’t the first time the PacOut Green Team has been deterred from cleaning up a particular site. In March, Tim Haywood resorted to calling the Eureka Police Department about a camp on Woodley Island. In that case, however, the folks who’d made the mess were gone.

At the time, EPD Detective Neal Hubbard explained the way enforcement typically works, beginning with a citation for illegal camping, for unlicensed dogs if applicable and, if trash is prevalent, a citation for “unlawful storage of garbage.” People are allowed a chance to clean up. Arrests, Hubbard noted, are rare unless warrants have been issued.

This is hardly a situation unique to Humboldt. In today’s L.A. Times, an editorial titled “The homeless in the Ballona Wetlands should be moved, and given help” asserts, “No one likes evicting desperate people from camps, but the ecologically fragile wetlands must be protected.” The Times also makes the important point that, “The difficult question is not whether to remove homeless people… but how to help get them services in an area low on shelters and transitional housing.”

Ostrom finished his FB post with a plea for action:

Something needs to happen. PacOut Green Team wants to clean that area up, but first law enforcement needs to run the illegal campers out. Why can’t the destruction of our local wetlands and pollution into the bay be a big enough reason to do something about it? Can the feds fine Humboldt for allowing illegal campers to destroy our wetlands and coastal waters? Everyone talks about potential hazards hitting our storm drains. What about the crap that hits the bay from these camps! Why isn’t this a problem worth fixing?

I’m hoping you could bring some awareness to this issue. I’m sure the citizens of Eureka have no idea of the damage that is being done to our land.

Consider this an awareness boost. Next steps in bolstering environmental protection while remaining compassionate to our fellow humans? You might start by reaching out to your elected officials.

(Note: As I was writing this post in LoCOHQ, the same area referenced above became the site of a shooting.)

To make a more immediate difference, show up this Saturday to help the PacOut Green Team make Scenic Drive a cleaner place.

As reported in yesterday’s Times-Standard, researchers made a “major breakthrough” in figuring out the cause of the ongoing sea star wasting disease. Today on Coastal Currents (on KHUM at noon), Mike Dronkers and I will talk with marine ecologist Joe Tyburczy of the California Sea Grant Extension about what the identification of the virus means for the species in particular and the ecosystem as a whole.

In other ocean news

Now that California’s banned some forms of single-use plastic bags, attention is turning toward cigarette filters.

The ocean is warmer than ever.

In related news, here’s the most detailed map of ocean acidification yet.

From the T-S’ “Fishing the North Coast,” rain and salmon on the way.

Speaking of salmon, John Oliver gets in on the salmon cannon.

And, your obligatory dead-thing-on-the-beach photo (this one is pretty cool): 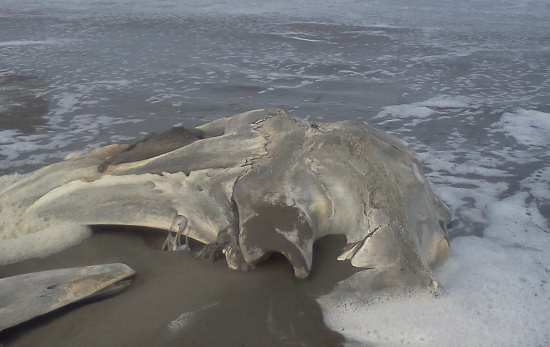