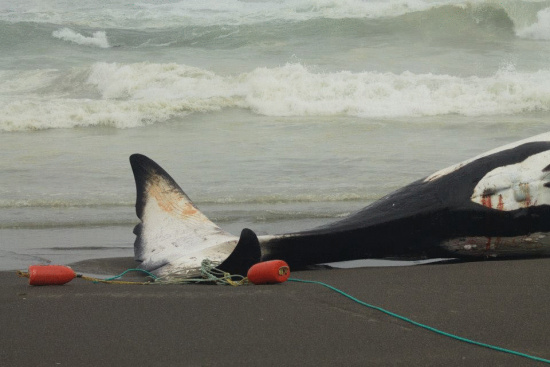 Researchers sprang into action Saturday when a 25-foot dead male orca washed up at MacKerricher State Park beach, about three miles north of Fort Bragg, working till dark that night and all day Sunday to move the carcass beyond the tide and collect samples of this rare specimen. 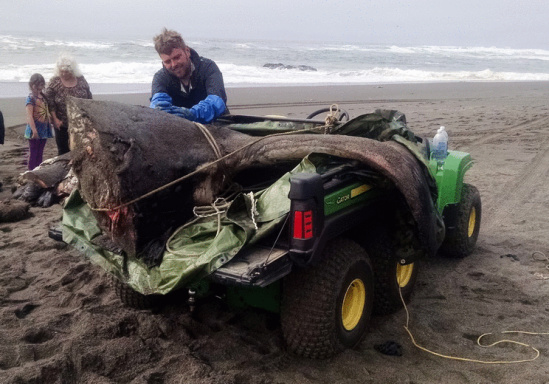 HSU’s Chris Callahan with the orca’s pectoral fin – he has extracted DNA from a skin sample to enable species identification. By Jeff Jacobsen.

An initial exploration into cause of death yielded nothing decisive, said marine mammal biologist Jeff Jacobsen, who was among the team dismembering the whale.

“There’s no water in the lungs, no broken bones,” he said, but noted the two buoys and approximate 150 feet of weighted rope tangled around the killer whale’s tail. “It was bound in tight,” Jacobsen said, “but didn’t bite deep into the body – it’s conceivable the entanglement happened post-mortem.” 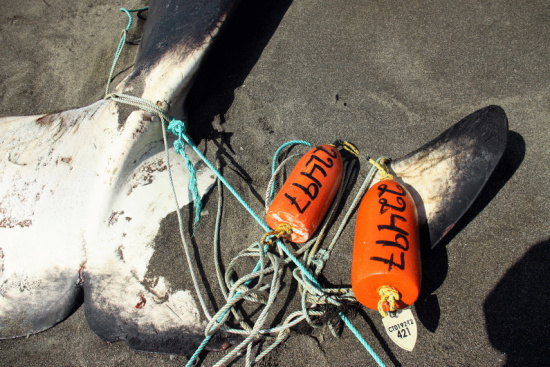 Buoys and line wrapped around the orca’s tail. By Jeff Jacobsen.

Given the lack of visible evidence pointing to something definitive, a likely cause could be illness. “It’s mostly bacteria and us that get them,” he noted. While more analysis will hopefully lead to answers, “It’s rare to have a smoking gun with these things,” Jacobsen said.

In the course of the dissection, two harbor seals, one fairly recently eaten, were found in the orca’s stomach, suggesting the killer whale hadn’t been dead for very long before washing up.

Jacobsen estimated the age of the whale at around 20 to 30 years old. Male killer whales can live to about 60 on average, with females living until about age 80. “Their life cycle is almost identical to ours,” he said.

At this point, the whale’s parts have been divvied up, with the skeleton assumed by the Noyo Center for Marine Science, organ samples taken by the Marine Mammal Center veterinary team, the dorsal fin in the care of Jacobsen and the rest of the carcass’ remaining chunks returned to the sea.

What will Jacobsen do with the dorsal fin? 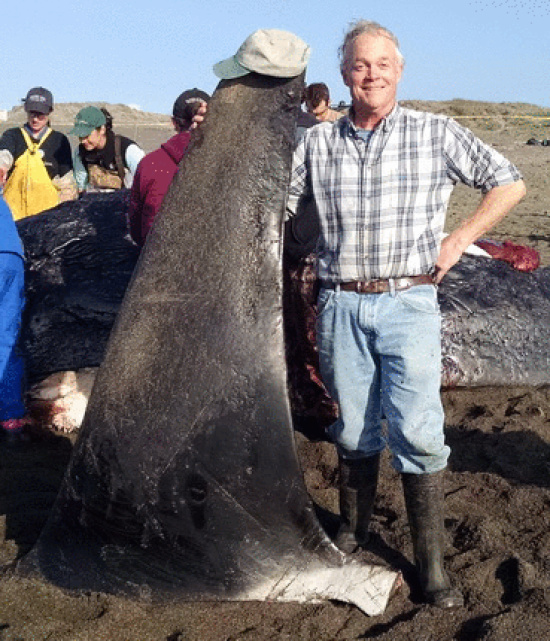 1.) Make a mold to create sculptures for display;

2.) Freeze the fin and transfer it up to NOAA’s Seattle office, where researchers will use it to improve tag design.

“They’ve never been able to work with a male dorsal fin,” Jacobsen said. “This will help them better understand [how to create tagging devices] that result in less possible injury to the animal.”

To find out more, tune into KHUM’s Coastal Currents tomorrow (Wednesday) at noon when Naked Whale Research director Jodi Smith will speak to Mike Dronkers about what happened, what to expect next and the state of the killer whale population in general. 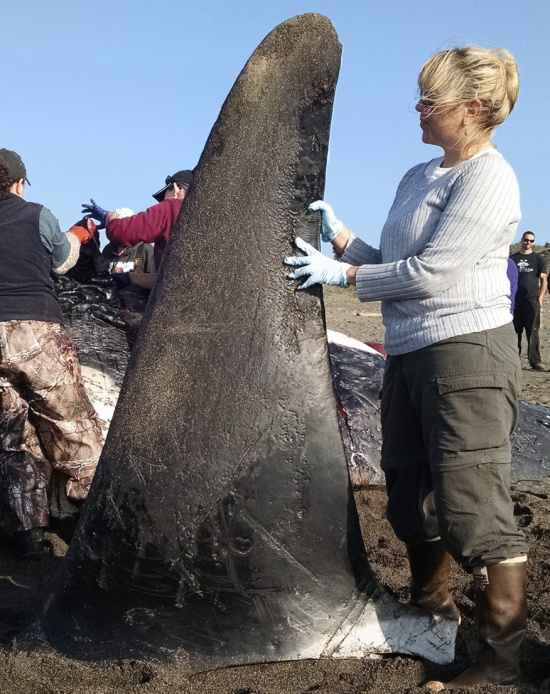 A volunteer with pectoral fin; DNA was extracted to enable identification of the specific type of killer whale. By Jeff Jacobsen.