(UPDATED) Your Week in Ocean: Cyanide On the Bay? Plus Abalone Survey and A-Town Underwater

Last night before a standing-room only crowd, the Humboldt Bay Harbor, Recreation, and Conservation District board voted 4-0 to accept $5,000 from US Mine Corp. for a 3-month “Exclusive Right to Negotiate” for a large portion of the former Evergreen pulp mill in Samoa. Commissioner Greg Dale was absent.

US Mine Corp. requested a 6-month agreement with options for extensions to explore the idea of building a facility to process ore from unspecified mines and use the waste to manufacture pre-formed concrete products. The public raised questions about water and air pollution, with particular concerns for Humboldt Bay’s fragile ecosystem, wildlife, and fishing industries.

Commissioners voted for a 3-month agreement so the company could provide answers to basic questions about its plans, while allowing the District to continue the search for other potential tenants.

Many speakers focused on concerns about the use of cyanide, which is used to extract gold from ore. Characterized by US Mine Corp’s president A. Scott Docktor as “not that toxic,” cyanide processing was banned in 1998 by voter initiative in the state of Montana, when 85,000 gallons of cyanide-laced water leaked through damaged leach pad liners,killing all life in a 17-mile stretch of Colorado’s Alamosa River.

Others raised fears of dust and particulates, citing decades of air pollution from the two pulp mills and PG&E’s former nuclear power plant.

Humboldt Hill resident Nova Cramer said, “My great grandfather was a gold miner, and I hold the deed to the King Tut mine. But I’m no fan of gold mining – I survived the whaling station, the pulp mills, and the nuclear power plant, and I have a long list of dead people.”

Despite company claims that operations would be entirely inside the pulp mill warehouses, with no discharges to air or water, the public was skeptical.

“No amount of engineering or spill response planning will prevent the level of damage to Humboldt Bay that would occur from a major earthquake,” said Jennifer Kalt of Humboldt Baykeeper.

The Harbor District and US EPA recently removed millions of gallons of caustic chemicalsleft behind by the previous operator, Evergreen Pulp, a Chinese corporation that was sold to a shell company in 2008. The cleanup has to date cost taxpayers $4 million and is expected to cost $10 million to complete.

Arcata resident Rocky Drill said, “This sounds like another Wall Street project, where a few people make a bunch of money and then leave us to clean up the mess.”

Few questions or concerns raised by the public or the Commissioners were answered. The company’s representatives either did not know or were not forthcoming with specifics about its proposal, saying that they did not know what type of ore it would process, what chemicals would be involved, or even which mines it would serve.

Ralph Faust, retired Coastal Commission Senior Counsel and former Humboldt County Planning Commissioner, advised weighing the opportunity cost of tying up the property “in visions of sugar plums…Is there any suggestion that there’s an approvable project at the end of the tunnel?”

Commissioner Pat Higgins said, “We have very high standards for what’s going to be acceptable, in terms of proposals that are protective of Humboldt Bay - so I don’t have any problem hearing them out.”

Commissioner Mike Wilson requested an amendment to shorten the agreement to 3 months, since there isn’t enough information on the table. “Three months should be enough time to decide whether this is something we want to look at,” he said. “I am concerned about the opportunity cost, and also for how we are marketing this facility and how it fits with our vision.”

Commissioner Richard Marks advised US Mine Corp that the bar is very high for convincing the Humboldt Bay community to keep an open mind about a new toxic industry. “You’re dealing with people who’ve lived with toxic chemicals in their neighborhoods, and aren’t interested in going back to those days.” 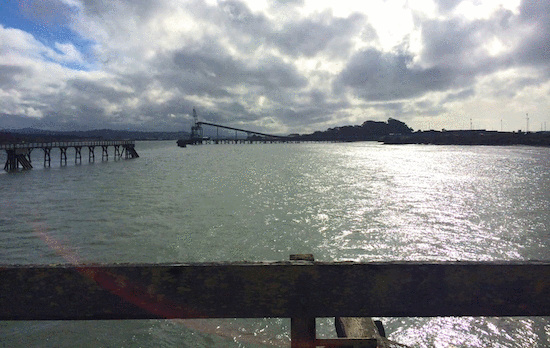 View of Humboldt Bay from the former pulp mill (which has a new name that no one can remember at the moment).

Oh, sure, attending a public meeting might not rank high on your list of Fun Ways to Spend An Evening, but many things are worse: dental hygiene visits, for example. Cleaning out the coat closet. Being forced to listen to an entire Grateful Dead album. Reading LoCO comm– er, you get the point. Which is to say that the agenda for tonight’s Humboldt Bay Harbor, Recreation and Conservation District boasts a couple items of particular interest.

1. Tonight: Cyanide on the bay?

US Mine Corp. is looking at the former pulp mill as a possible site for a processing facility. At tonight’s meeting, which starts at 7 p.m. in the Woodley Island Meeting Room, the mining corporation will ask Commissioners for a 180-day Exclusive Right to Negotiate.

A fairly new corporation called US Mine Corp. is looking at the former pulp mill as a possible site for a processing facility accessible for unspecified mines from Alaska to South America. This would involve using cyanide and other chemicals used to extract gold from aggregate rock – although the details have not been revealed, since there is no formal proposal yet.

Come to tonight’s meeting at Woodley Island to let the Harbor Commissioners and the US Mine Corp. know that storing cyanide and other toxic chemicals on our Bay to process mining ore is unacceptable. The Harbor District and US EPA recently removed millions of gallons of caustic chemicals left behind by the previous operator of the pulp mill. The cleanup has to date cost taxpayers $4 million and is expected to cost $10 million to complete.

Humboldt Baykeeper applauds the District for protecting Humboldt Bay from Evergreen Pulp’s mess - but wonders why anyone would consider putting a cyanide leaching operation in the tsunami zone near one of the most active earthquake zones in the Pacific. No amount of engineering and spill response will prevent the level of damage to Humboldt Bay that would occur from a major earthquake.

Cyanide processing was banned in 1998 by voter initiative in the state of Montana, when 85,000 gallons of cyanide-laced water leaked through damaged leach pad liners, killing all life in a 17-mile stretch of Colorado’s Alamosa River.

The District should continue its search for environmentally-appropriate industries to use the former pulp mill.

Also of interest is PG&E’s application for the final site restoration plan for the former nuclear power plant, which will now begin wending its way through the various permitting processes.

The California Department of Fish and Wildlife is considering changes to current red abalone management practices. If you participate in sport abalone fishing, CDFW would appreciate your participation in this survey. (Deadline: March 6, 2015)

You may know the story. In 1958, four crewmen set sail in the Golden Rule in an attempt to stop atmospheric nuclear testing in the Marshall Islands. In 2010, the battered, neglected and storm-damaged, remains of the historic Golden Rule were rediscovered. A project to restore the Golden Rule to her former glory continues. Our local Veterans For Peace organization intends the Golden Rule to sail again as both a symbol and educational tool in the mission of abolishing war.

Efforts to raise restoration funds for the Golden Rule Peace Ship via Indie Gogo wrap up tomorrow. On Thursday, March 5, the monthly Ocean Night event will also serve to raise funds for the project with a showing of Nuclear Savage (no relation).

Curious about how much of Arcata’s lands will be underwater in 50 years due to anticipated sea level rise? Join Northcoast Preparatory and Performing Arts Academy students in the Arcata Creamery district tomorrow (Friday, Feb. 13) from 4 to 7 p.m. for an evening of art and education focused on climate change and how it will impact current and future generations. Expect poetry, dance, music, theater and art to make the science more bearable.

Join Humboldt State master’s degree candidate Alex DeJoannis to observe our local wintering flock of Western Snowy Plovers at Little River State Beach in McKinleyville on Saturday, February 21 from 9 to 11 a.m. Meet at the north parking lot of Clam Beach for a leisurely stroll along the beach to learn about Snowy Plovers in their native beach habitat. This event is open to all ages. For more information or to RSVP, contact Friends of the Dunes at (707) 444-1397 or info@friendsofthedunes.org.

News from the 114th Congress via Congressman Jared Huffman:

Jennifer Savage is the Coastal Programs Director for the Northcoast Environmental Center, the parent organization of Humboldt Baykeeper. She also serves as Humboldt Surfrider‘s chairperson. Thanks for the ongoing support!