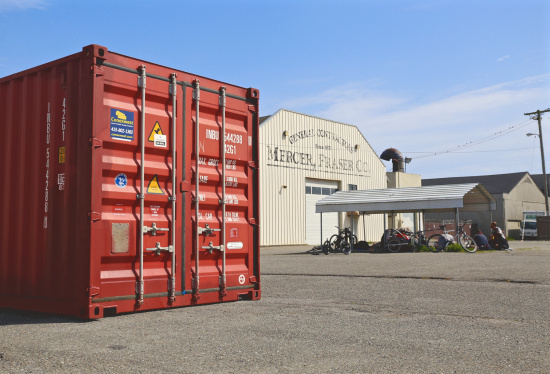 One shipping container has already been delivered to the lot, where homeless people regularly gather. | Photos by Andrew Goff.

A new proposition for addressing Eureka’s homelessness problems emerged seemingly out of nowhere yesterday from a very unexpected alliance: The Betty Kwan Chinn Homeless Foundation (that’s the predictable part) has joined forces with the Humboldt Coalition for Property Rights, aka HumCPR, a private corporation that until now has been focused exclusively on advancing private property rights in the county.

The proposition itself is also a bit surprising. The two agencies, which have united under the name Greater Eureka Community Outreach Program (GECOP), propose putting homeless people inside 40-by-8-foot Conex shipping containers — not to ship them out of town, as some have advocated, but to provide them with temporary shelter. 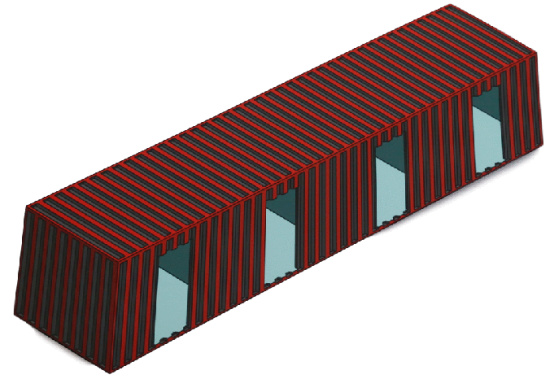 Under this proposal, each container will be retrofitted to include four double-occupancy housing units, each measuring roughly eight-by-10 feet and featuring electricity, a window, a door, two beds and some shelving. Portable toilets and the containers themselves will be placed in a vacant lot near the corner of West Third and Commercial streets, behind the Mercer-Fraser warehouse.

At a joint press conference today, Chinn, the renowned local homeless advocate and recipient of the Presidential Citizens Medal, called the new arrangement “a miracle.”

“I have my energy, but I don’t have money,” she said with her characteristic smile. “They have money. So, that’s how we work.”

The “they” in her statement remains somewhat unclear. The county’s Department of Health and Human Services is preparing to ask the Board of Supervisors to approve roughly $130,000 in department funding to pay for the first five Conex shipping containers, enough to house up to 40 people. In the meantime, HumCPR has advanced the money to buy the containers from someone in the Bay Area.

“We got a heck of a deal,” said HumCPR founder and current Humboldt County Planning Commissioner Lee Ulansey. 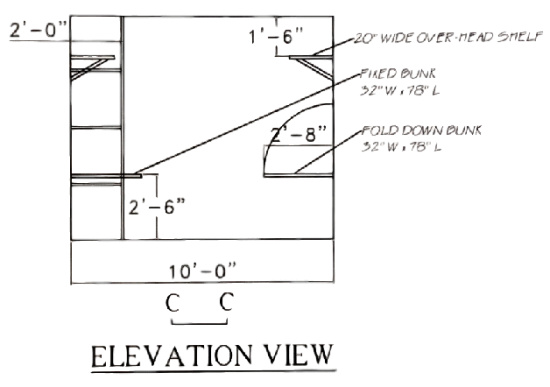 Each unit will feature a fixed bunk, a fold-down bunk, a coatrack and shelves. Click to enlarge.

Funding, donations and discounts are also coming from various local businesses, though the amounts remain nebulous at this early stage. HumCPR Executive Director Alec Ziegler noted that one shipping container has already arrived (see picture above), and construction is scheduled to begin this weekend. The plan is to have the container-camp finished and operational by April 26, less than a week before the City’s May 2 deadline for homeless people to leave he Palco Marsh.

Ziegler said the plan is to start by serving up to 40 individuals, which could conceivably fit in five shipping containers. Both men and women will be accommodated, including those with mental health issues. No children, but dogs will be allowed as long as they’re licensed and vaccinated.

Transitional and supportive services will be provided onsite and overseen by the Betty Kwan Chinn Homeless Foundation, according to Theresa Hessian, program manager at the Betty Kwan Chinn Day Center. City and county staff, including members of the multi-agency Mobile Intervention and Services Team, will also interact onsite with people living in the containers.

“I will provide breakfast, lunch and dinner for them,” Chinn chimed in, prompting a wave of applause. Her Day Center will provide three full-time staffers and volunteers to help run the site. 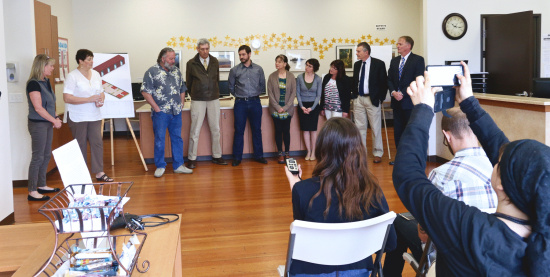 Among the questions raised by this new proposal is how such a project fits into the city and county’s adopted strategy on homelessness, Housing First, a model that calls for placing homeless people into permanent housing as a first step, preceding treatment programs, life skills classes and other measures. In this model, emergency shelters and transitional housing are seen as wasteful diversions of energy and resources. 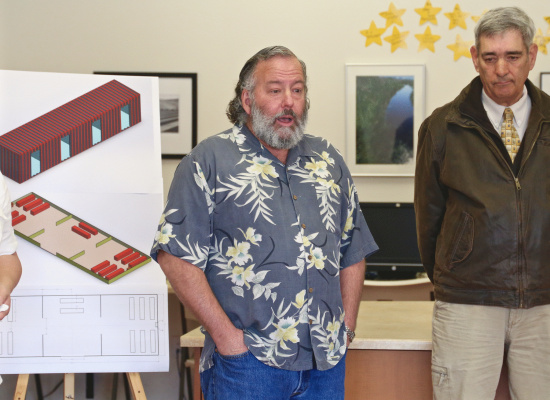 Eureka Mayor Frank Jager agreed. “We’re going to continue with our Housing First model, and I think that’s, in the long run, what’s really gonna help us get over the hump of solving this problem of homelessness here in the City of Eureka,” he said. “But this is a tremendous step in that direction to give us some temporary time to work with all these people and get them into housing.”

Of course, that’s precisely the opposite of not the Housing First model. As Ulansey himself said later in the meeting about this shipping-crate approach, “It’s not intended to be permanent housing in any way, shape or form.”

In the past two years both the city and county hired Sacramento consulting firm Focus Strategies to advise them on the most effective means of addressing homelessness, and the results were consistent and explicit in both cases: The local governments should “focus [their] efforts on solutions that will actually end homelessness, rather than attempting to better manage the problem.”

While the Housing First strategy has met with plenty of skepticism from the public and resistance from various nonprofits in the area, both the Eureka City Council and the Humboldt County Board of Supervisors have officially signed on. But with the City’s pressing Palco Marsh evacuation deadline and the acute, festering problems associated with the large local homeless population, local officials have moved to implement stopgap measures.

In January, for example, the Eureka City Council, in a contentious 3-2 vote, declared a shelter crisis, allowing for emergency shelters on city-owned properties, among other measures. Jager today said that declaration allows the city some “wiggle room” in permitting this new project. And Ziegler, HumCPR’s executive director, said the organization has already submitted to the City Council a request to add the site to the crisis declaration. That matter is scheduled to be considered at Tuesday’s council meeting, he said. 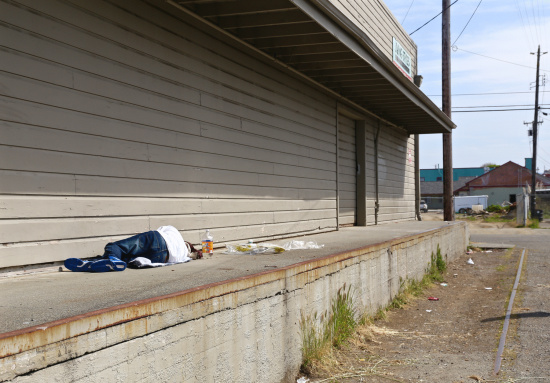 A homeless man sleeping on a loading dock near the site where the project is proposed to be located.

Another loose end is insurance. The GECOP alliance has yet to line up a policy to cover temporary housing on this industrial site. “We have some really promising and tentative leads in that area,” Ulansey said, “but we’re gonna need to get that done.”

The City of Eureka still has an outstanding Request For Proposals (RFP) for a city-sanctioned homelessness camp. The due date for those proposals is April 22, and the City Council is scheduled to choose one by May 3.

“This is 40 people,” he said, referring to the current project’s capacity. “It doesn’t solve the problem; it solves a portion of the problem for the population in the Palco Marsh. … Other groups and organizations need to continue their work. They need to start new efforts to have a more encompassing solution.” 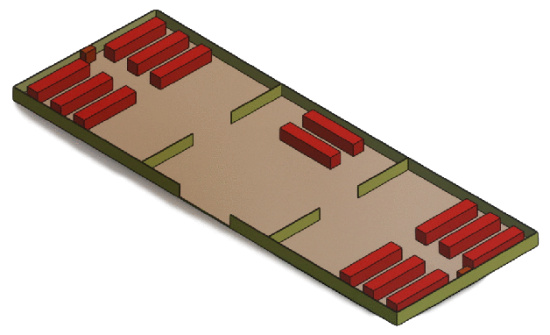 Meanwhile, it’s unclear how long the shipping-container solution will last or how large it may get. A schematic illustration at today’s meeting (right) showed 14 shipping containers arranged on the Mercer-Fraser property. And Ulansey noted that if Mercer-Fraser chooses not to extend the six-month agreement, it won’t bring the project to a stop.

“This cargo container approach, they’re mobile, [and they’re] really easy and inexpensive to move,” Ulansey said. “So while our time at the Mercer-Fraser property may be limited it would be a really simple project to pick them up and set them down someplace else. And with the business community involved we’re pretty optimistic that down the road we’ll be able to convince another lucky property owner to help us out.”

The shipping container construction work that’s scheduled to begin this weekend will involve JLF Construction, Bongio Construction and O&M Industries, according to Ulansey. Schmidbauer Lumber has donated some materials and offered others at “a massive discount,” he added. 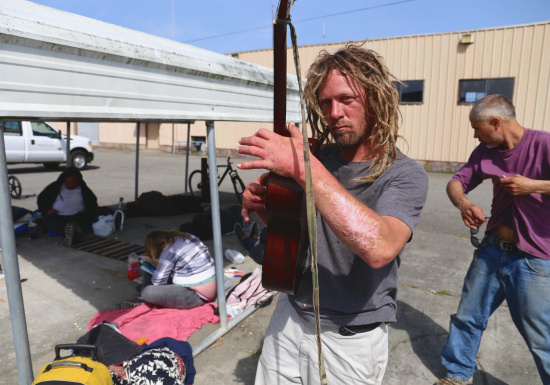 A homeless man who goes by Mercury gave his opinions on the new project.

While the press conference was under way, a group of homeless people was gathered with two dogs and some personal belongings in the shade beneath a corrugated metal awning in the Mercer-Fraser lot. The first delivered shipping container sat locked on the concrete nearby.

The folks gathered there had read about the project proposal in the paper. Asked if they’d be interested in moving into one of these containers one guy bellowed, “Yeah, I think so. Yeah.”

With the two dogs barking nonstop, another man, who later identified himself as Mercury, got up to address the question. “I’d be more interested in self-owned containers,” he said. He suggested that recycling revenues from Arcata and Eureka could pay for them, along with some composting toilets and solar panels.

But when pressed, Mercury said he welcomes the opportunity to move into one of the containers.

Are these containers the solution? Mercury is skeptical.

“This set-up right here is a band-aid on a fuckin’ knife wound,” he said. “Or whatever — a sword chopping off your head. You’re not gonna put a band-aid on it, fuck that.”

He played a song on his guitar, joked with one of his companions about smoking a joint and went back under the awning.

As three reporters walked up an alley and away from the homeless gathering, an employee stuck his head out the back door of Living Styles Furniture and Mattress Showroom, whose luxurious products and advertisements offer a stark contrast to the living conditions behind their building. The furniture employee looked suspicious, ready for a confrontation. But the reporters were not what he was expecting. They looked different. “That’s a good thing,” he assured them.

A few yards away, another homeless man was asleep on the showroom’s concrete loading dock.