ACV Bomb Scare This Afternoon (Spoiler!: It Was Not a Bomb) »

Tomorrow a Federal Judge Could Stop the Palco Marsh Evictions. Here are the Arguments For and Against 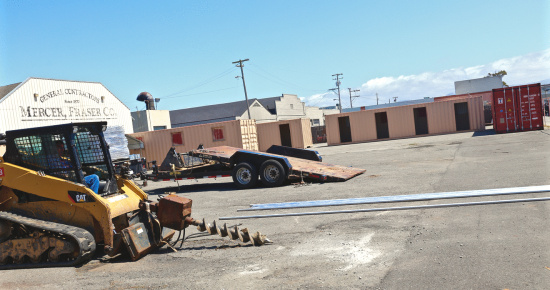 Work progresses today on a container-based temporary facility for the homeless in the Mercer-Fraser parking lot. The facility is key to the city’s legal argument that the Palco Marsh evictions should be allowed to go forward immediately. Photo: Andrew Goff.

The city of Eureka still has one final hurdle to clear before it evicts homeless campers from the Palco Marsh Monday.

Tomorrow afternoon, U.S. District Court Judge Jeffrey S. White will decide whether or not to place a temporary restraining order on the city, preventing it from carrying out its plan to dismantle the waterfront encampments next week. The restraining order was requested by attorney Peter Martin, who is suing city government over the plan.

We wrote about Martin’s case earlier in the week. Today the city of Eureka filed a brief arguing that his petition for an immediate restraining order is nothing more than a “bad faith litigation tactic designed to attempt to prevent the [c]ity from enforcing a local ordinance.”

The brief, filed by Eureka City Attorney Cyndy Day-Wilson, attacks Martin’s argument that his clients — homeless people currently living in the Marsh — require immediate action from the court to stop the city from violating their civil rights by evicting them from their camps. In particular, she argues that the evictions will not “irreparably harm” Marsh residents — something Martin would need to demonstrate to the judge if the restraining order is to be granted.

In her case, Day-Wilson leans heavily on the argument that there is more than enough legal bed space available to house the people still living in the Marsh — 113, by their count. When you include the container facility under construction at Mercer Fraser and the new emergency shelter at the city parking lot at Washington and Koster streets, she argues, the city has 130 slots open for homeless individuals.

Asking people to move from one free camping spot to another cannot be regarded as an irreparable injury, she says. “While it is true that plaintiffs would be relocated,” she writes,

such harm is not irreparable. Their belongings and even their animals will be provided for and, indeed, plaintiffs are being offered accommodations free of charge … Under these facts, it is difficult to envision how homeless individuals who are doing damage to public land would be “injured” based on their temporary relocation to a shelter.

Day-Wilson also assures the judge that the city has plans in place to store the belongings of the Marsh campers, and to attend to their pet dogs.

In addition, Day-Wilson makes a couple of other cases: That residents have had much notice that this is coming, that a state court has found the city’s anti-camping ordinance Constitutional, and that the city’s interest in evicting the campers outweighs the campers’ interest in staying in the Marsh longer.

In the latter case, she relies heavily on declarations from Eureka Police Chief Andy Mills and the city’s Parks and Recreation Director, Miles Slattery. Slattery tells the court that continued delay could not only jeopardize current and future grant monies that the city seeks to build out the Waterfront Trail, but that garbage and waste from the encampments constitute an ongoing threat to the marsh — an “environmentally sensitive habitate” — and to the bay.

Martin and the city will make their cases tomorrow afternoon at 2 p.m., in Judge White’s courtroom at the federal courthouse in Oakland. It’s not immediately clear (to us, anyway) whether the judge will approve or deny the temporary restraining order at the end of the hearing, or whether his ruling will come at some later time — before Monday morning, presumably.