« Eureka Man Sentenced to Over 9 Years for Armed Robbery 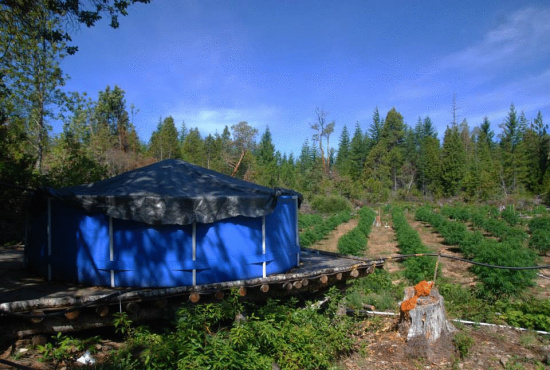 Press release from the Yurok Tribe:

“We are targeting the illegal grows that pose the biggest threat to our community,” said Thomas P. O’Rourke Sr., Chairman of the Yurok Tribe. “We will not be idle, while these growers damage our natural resources, water supplies and way of life.”

This collaborative law enforcement action, involving the Tribal, state and federal officers, is part of Operation Yurok, an ongoing initiative, which aims to protect the people and natural resources within the Tribe’s aboriginal lands. The Operation is in its fourth year, and has resulted in the eradication of about 70 environmentally destructive marijuana farms, containing nearly 80,000 plants.

The clandestine cannabis industry has grown tremendously in the past five years. The increase in the number of big plantations adversely affects the Yurok people in several different ways. During the dry summer months, the marijuana growers unlawfully divert massive amounts of water from the streams that feed municipal and privately owned water delivery systems on the east side of Yurok Reservation. Salmon, a vital traditional food source for the Tribe, depend on the same streams for survival. Large amounts of pesticides, herbicides and fungicides, along with fertilizers and even human waste matter are common sights at the outsized cannabis operations. While collecting traditional foods and basket materials, many Tribal hunters and gatherers are fearful of coming into contact with armed growers, a scenario that has now become common. A recent rise in people made sick by Escherichia coli is likely linked to the underground marijuana market. Those participating in this black market economy are also strongly suspected of bringing hard drugs, such as heroin and methamphetamine, onto Tribal lands.

The east side of Yurok Reservation is located in one of the most rural and rugged parts of California. In this remote area, there is not enough funding for law enforcement to effectively police the sweeping forested lands.

Operation Yurok began in 2013 after residents living on the upper reservation nearly ran out of drinking water because of illegal water diversions from creeks that feed the Tribe’s and individual water systems. To initiate an adequate response to this crisis, the Yurok Tribe reached out to California Governor Jerry Brown to ask for assistance. Governor Brown sent members of the California National Guard’s Counterdrug Task Force to help rein in the rampant water thefts and environmental damage caused by marijuana cultivation on Tribal lands. Other collaborating agencies include: the Bureau of Indian Affairs, CA Fish and Wildlife, Del Norte Sheriff’s Office, Water Quality Control Board and others.

Last year, law enforcement officers eradicated 55,000 growing plants, nearly 1 ton of marketable marijuana and one butane-based hash lab. The team of police officers encountered evidence of Mexican drug cartels at three different locations, where there were chemical containers with labels written in the Spanish language. Also in 2015, Yurok Public Safety Department officers, environmental staff and California Fish and Wildlife officers dismantled a half dozen makeshift dams that were diverting whole creeks to irrigate marijuana crops. In the days after the operation concluded, reservation residents reported seeing an obvious rise in the streams that feed into the Klamath River.

This year, the Tribe will for the first time be taking legal action against the growers for violations of the Cultural Resource Protection Ordinance, which is place to protect Tribal cultural properties. The clear cuts, water pollution and grading, associated with the grow sites, have the potential to harm cultural resources.

The Yurok Tribe is largest federally recognized tribe in California. The natural resource-based Tribe is best known for the implementation of leading-edge watershed restoration projects, language preservation program and cultural protection effort. The Tribe is a Zero Tolerance Ordinance, making all illicit drugs illegal on the Reservation.