(AUDIO) The Vagabus Stopped by the KHUM Studios! 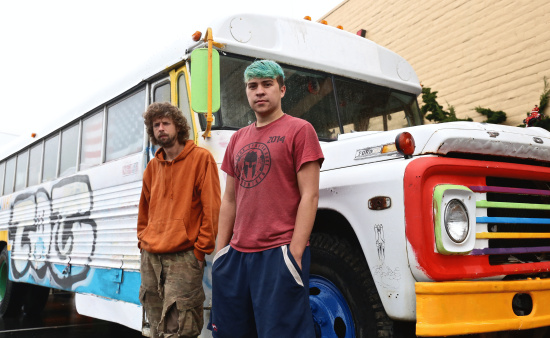 Steven and William by the original bus. File photo by Andrew Goff

Vagabus voluntourists Steven, Leif, William, and Pixie stopped by the KHUM studios today! They are currently doing some community service work in Fortuna for the next few days before they head down to Garberville.

The Vagabus is the brainchild of Steven Boutwell who came up with the concept around a fire one night drinking some box wine (the Lost Coast Outpost has fabulous articles detailing the backstory and some of their adventures in Humboldt.. check it out here and here).  The Vagabus crew originally had plans to head to Argentina but now they’re looking to travel the US, continuing to do community service along the way.

A lot has changed since they arrived in Humboldt.  They now have official nonprofit status and their caravan has doubled in size.. growing to two buses (a third on the way), 10 members and six dogs.