Tanker Truck Carrying 7,000 Gallons of Gasoline Rolls on Highway 101 in SoHum; Traffic Reduced to One Lane » 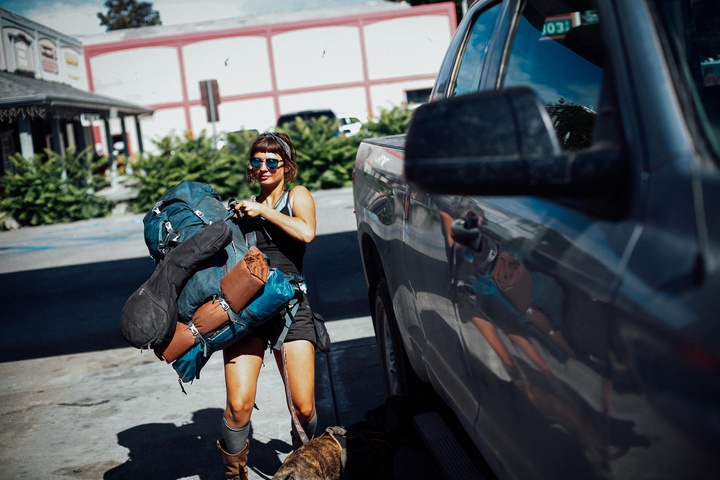 Emily Rothman of Florida throws her pack into a truck that will take her to a friend’s pot farm in Garberville, Calif. She said all the women she knows have been warned of things to watch out for when coming to the area for work. | Sarah Rice for Reveal.

The Emerald Triangle’s underground marijuana industry, with its backwoods setting and its code of silence, has given rise to widespread exploitation of women including numerous cases of violent sexual abuse. That’s the key takeaway from a months-long investigation from the Center for Investigative Reporting (CIR) published today on the organization’s Reveal platform.

In an 8,000-word deep-dive story, CIR reporter Shoshana Walter examines the culture, economy and power dynamics of the local weed industry, bringing to light numerous accounts of exploitation, abuse and trafficking. She also calls out the Humboldt County Sheriff’s Office, saying “law enforcement repeatedly has failed to investigate abuse and sexual violence in the Industry.”

“The fact that something so awful could be going on in Humboldt County surprised and disturbed me.”

The Outpost asked Walter a few questions via email about her story and what she learned while reporting it. That reporting began after a woman from Humboldt contacted the Center for Investigative Reporting to say she’d been sex trafficked.

“She basically told me, ‘This is happening here, and no one seems to care,’” Walter recalled. “Of course, everyone in California, and across the globe, knows of Humboldt’s reputation as a marijuana growing hub. The fact that something so awful could be going on there surprised and disturbed me. So I went to check it out.”

She spent about two months in Humboldt and surrounding counties during last year’s harvest season, and despite the much-touted secretive subculture of SoHum Walter found people willing to help.

“I slept on several grows, crashed on peoples’ couches, and became well acquainted with several motels in Garberville,” she said. After two months she returned home to Oakland,  but she made additional trips back up here. “I really wanted to understand the culture in Humboldt,” she said.

Her story introduces us to a girl who at age 12 started trimming weed for a grower who gave her meth to speed up her work. At age 14 she ran away to a Eureka homeless shelter, “only to discover that pimps were using it as a hunting ground.”

Another woman fled a local grow scene on foot after the owner started pressuring her for blow jobs and sex. A woman from Mexico came to Mendocino County for a restaurant job and wound up working for a marijuana farmer who “forced her to cook, clean his house and have sex with him,” the story says. Local social service providers and victims alike told Walter that women have been trafficked to the area from around the country and the world.

How common is this? Here’s Walter’s take:

I want to be clear, just as we don’t know exactly how many grows exist in Humboldt (although Lost Coast [Outpost] has done some great work trying to figure that out), I don’t know exactly how many women are being trafficked here. This is a crime, but it’s a crime that’s rarely reported and even more rarely investigated. As such, there is no data. What we do know is that there are large numbers of women being trafficked here, according to social service agencies, and the numbers of women seeking services for sexual assault and trafficking have grown over time. I also know this from talking to escorts themselves, talking to growers who have hired escorts, trimmers who’ve been exploited, trimmers who’ve witnessed escort activity while working on grows, and from speaking with trafficking victims, including a woman from Mexico, teenage girls from Humboldt county, and others.

Trafficking is not always easy to identify. It can look a lot like other things. An abusive relationship, for example. Drug addiction. Debt peonage. When I asked law enforcement in the Emerald Triangle how common trafficking is, several officers described the prevalence of “gold diggers.” I heard this from people in the industry, too. Certainly, there are people who exploit human relationships for financial gain. But this is not a proper explanation for someone who, for example, moved into her employer’s house after her yurt sank, and then felt expected to provide sex to pay off the debt. 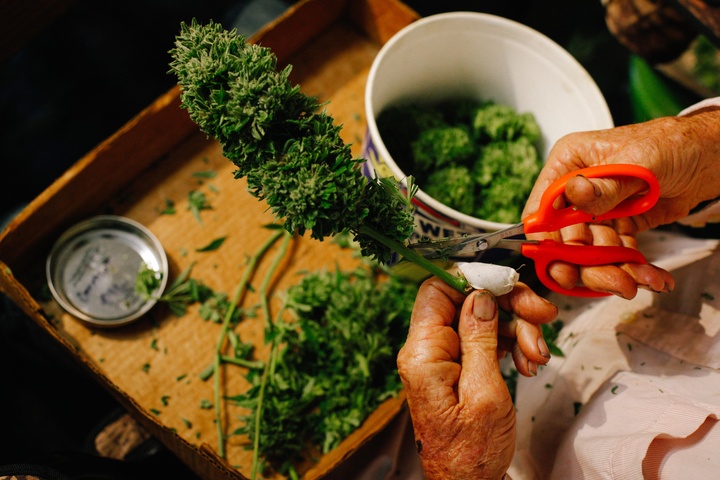 Richard Mansfield trims cannabis on his daughter’s farm in Redcrest, Calif. Workers rotate the buds with the tips of their fingers as they clip off the stems and curly bits of leaf. | Sarah Rice for Reveal.

In her report Watler explores why women often avoid calling law enforcement. “For victims of sexual assault, the answer often lies beneath layers of fear and shame,” she writes. “Rape usually goes unreported, but trimmigrants face particular pressure to avoid law enforcement. Calling police may rule out future jobs in the industry, especially if that contact alerts police to an illegal grow.”

When victims do reach out to law enforcement they’re often not satisfied with the response. Walter notes in her story that sheriff’s deputies simply don’t have the resources to focus on every problem in our vast rural county. But she also notes that, like weed growers, the Sheriff’s Office has its own profit motives tied to the industry. From the story:

Humboldt County law enforcement agencies made 100 seizures of property and funds last year, including from farmers who had legal permission to grow. The value of the assets totaled more than $2 million – more per capita than was pulled from the state’s 15 most populous counties combined, state data shows. …

The result is tantamount to tunnel vision, said Kyla Baxley, the district attorney’s office investigator. “They’re going in to eradicate marijuana, and they would probably tell you nothing else is happening but the drugs.”

Are deputies deliberately turning a blind eye to the problem? Is it more than just a lack or resources? Walter responded via email:

This is a good question for law enforcement. I think there’s definitely a lack of resources, and a lack of knowledge. It’s clear there’s a high crime rate in Humboldt county, particularly for such a rural area, and law enforcement cannot thoroughly investigate everything. There’s also the problem of victims not reporting abuse in the first place. Most of the women I talked to did not call the police.

In part because of those limited resources, law enforcement has to make choices about what to pursue, and they have chosen not to prioritize investigations of trafficking, exploitation and abuse. I saw that time and again when victims did report. It’s simply not a priority for law enforcement.

A major thread in Walter’s story follows “Terri,” a pseudonym for one of the victims of convicted rapist Kailan Meserve. Terri, Walter reports, came to Humboldt County during the 2014 harvest season looking for trim work and wound up at the Yellow Rose bar in Petrolia, talking to a grower “twice her age, tan and muscular, with a swagger and salt-and-pepper hair” — Meserve.

The story goes on to recount Meserve’s assaults on Terri in nauseating detail and describe the impact those assaults had on the insular community of Petrolia. Ultimately the story paints a picture of a culture entrenched in secrecy and a criminal justice system that falls short for victims of sexual assault.

We asked Walter what members of this community — those involved in the industry and those who aren’t — can do to address the problem?

This is a great question. I think the most important thing people can do is acknowledge that there’s a problem. While reporting, I faced a lot of pressure not to report anything that would make the marijuana industry look bad. People who need help often face the same resistance. Simply acknowledging someone else’s pain can go a long way toward making victims feel comfortable coming forward. Many of the service providers I spoke with in more rural areas also told me they feel overwhelmed during peak harvest season, when seasonal workers pour into town. Creating resources for those workers and travelers, informing them of their rights, and providing access to those resources, might also help.

There are definitely people in the community who are aware of and care about the problem — advocates and community organizers, people who work with the homeless. I also spoke with law enforcement officers who recognize the problem, and are trying to work on it. But when it’s not really a priority, it’s hard.

Growers also seem to be unaware of their duties under labor laws. That makes sense, since so much of the industry remains underground. But I visited a lot of farms in compliance with local regulations that still seemed unaware of the requirements.

Read Walter’s full story over on the Reveal website.