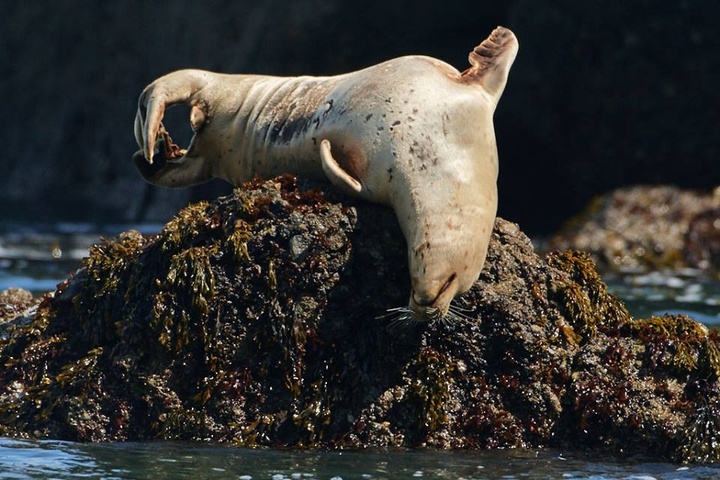 Seal yoga at Trinidad Harbor. Photos and captions by Alan Peterson. More of Peterson’s work can be see hanging in the F Street Foto Gallery, upstairs from Swanlund’s Photo, at 527 F Street in Eureka.

Once again, local wildlife photographer and friend of LoCO Alan Peterson has put together a stunning photo series.

Now breathe deep, scroll, and enjoy as LoCO transports you directly into the wild from your office chair.

Damselfly nymphs can be seen swimming just below the surface in the shallows of Freshwater Lagoon. During the evening, small groups of swallows gather to feed on them.

After watching the ground intently for several minutes, the hawk makes its move. McKinleyville.

A Red-shouldered Hawk takes a break from watching for prey to groom itself. McKinleyville.

A Common Raven got a little too close to the willows where the Red-winged Blackbirds nest and picked up an unwanted passenger. Freshwater Lagoon.

A Snowy Plover chick after a little more than two weeks out of the nest. Humboldt Lagoons State Park.

As a dense fog bank rolls in off the ocean, a Double-crested Cormorant arrives to fish in Freshwater Lagoon.

While gray whale mothers take their young up to the arctic to fatten up during the summer, small groups of males will feed along California’s northern coast. Patrick’s Point State Park.

Ospreys have a nictitating membrane: an extra semi-transparent eyelid that protects their eyes as they dive into the water. Freshwater Lagoon.

Green Herons are shy birds and usually prefer not to be seen, but they can occasionally be spotted in the alders and willows by Freshwater Lagoon.

Success. The otter secures a feast for itself. Trinidad.

A river otter swims through Trinidad Harbor, hoping to get an easy meal from the fishermen that just returned to the dock. Trinidad.

A Great Blue Heron flies along the shore of Freshwater Lagoon, looking for a good fishing spot.

Taking off from the water with wet feathers and a struggling fish requires a powerful effort by the Osprey. Freshwater Lagoon.

They Osprey twists back in the opposite direction as the fish changes course. Freshwater Lagoon.

An Osprey swerves in mid-dive to follow a moving fish. Freshwater Lagoon.

It’s the father Snowy Plover’s job to watch after the young once they leave the nest. If he senses a threat nearby, he herds the tiny chicks up into the dune vegetation. Humboldt Lagoons State Park.

An Osprey flies off with a trout in its talons at Freshwater Lagoon.

A river otter checks its surroundings after climbing out of the water in Trinidad Harbor.

A Red-shouldered Hawk diving after prey next to Widow White Creek. McKinleyville.