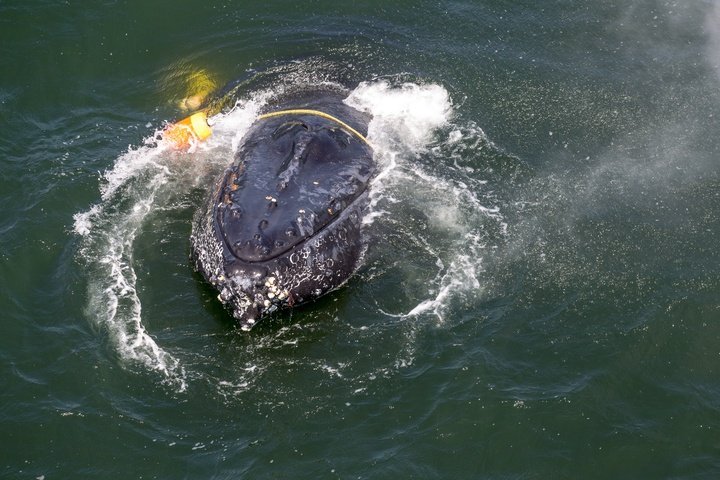 An entangled humpback whale as seen from a U.S. Coast Guard helicopter off the coast of Crescent City in 2017. | Bryant Anderson, taken under NOAA Fisheries MMHSRP Permit# 18786-01

SAN FRANCISCO— Californians will be pleased to know that Dungeness crab will be caught off the coast with greater care for endangered wildlife under a settlement announced today by the Center for Biological Diversity, the California Department of Fish and Wildlife and the Pacific Coast Federation of Fishermen’s Associations.

The legal settlement protects whales and sea turtles from entanglement in commercial Dungeness crab gear. The Center for Biological Diversity sued the state wildlife department in October 2017 after a drastic increase in the number of whale entanglements off the West Coast.

“As I’ve said many times, no one wants whale entanglements to happen,” said Charlton H. Bonham, director of the Fish and Wildlife Department. “This agreement represents hours of intense negotiation to help ensure they don’t happen and support the resiliency of the crab fishery in the long-run. I am thankful for the leadership of the Center for Biological Diversity and the Pacific Coast Federation of Fishermen’s Associations who realized something needed to be done together.”

“This is great news for whales and sea turtles fighting extinction off California’s coast,” said Kristen Monsell, a Center for Biological Diversity attorney. “The settlement will reduce serious threats from crab gear to these beautiful and highly endangered animals. This agreement is a turning point that gets us closer to zero entanglements and a healthy ocean.”

The settlement, subject to court approval, creates a comprehensive approach to the problem of whale entanglements. It expedites state regulation, ensures stakeholder input from the Dungeness crab Fishing Gear Working Group and formalizes a first-ever commitment by the state wildlife department to pursue a federal permit for protecting endangered species. While these steps are executed, the settlement calls for this year’s crab season to end three months early and prescribes protective measures for future springtime fishing seasons, when the greatest number of whales are present off the California coast.

In November 2018 the state announced it would seek a federal permit under the Endangered Species Act to address protected species interactions with the crab fishery. Obtaining a permit and developing a conservation plan as part of that process can take years, so the settlement spells out interim protections.

“This settlement represents the path back to normality for California’s crab fishery with built-in protections for whales and crab fishing operations under the Endangered Species Act,” said Noah Oppenheim, executive director of the fishermen’s association. “The past several years have been extraordinarily challenging for fishing families, and the actions we’re taking here are no exception. But in the end, we’re going to emerge together with a resilient, prosperous, and protective fishery that will continue to feed California and the nation.”