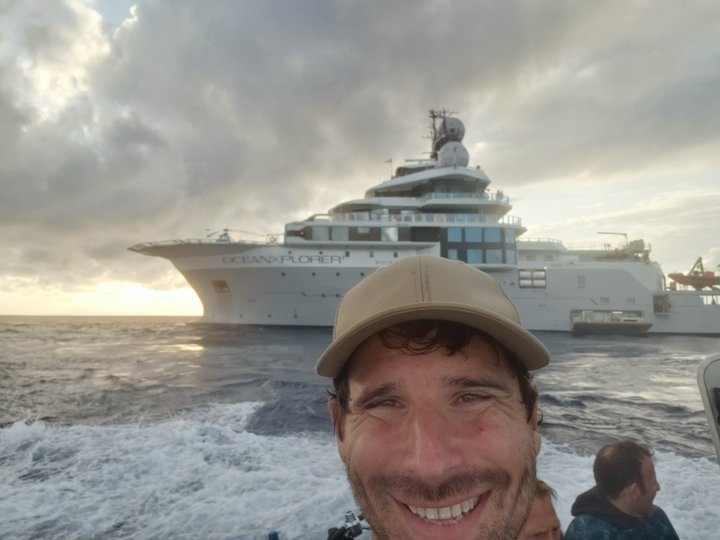 Eric Stackpole poses with the OceanXplorer. | Photos provided by Stackpole.

His fixation with gadgetry and exploration started at an early age. In middle school, when he wasn’t playing in the woods or along the Trinidad coastline, he was tinkering with ham radios as a member of the Humboldt Amateur Radio Club. By the time he was a senior at McKinleyville High, he was competing in the Massachusetts Institute of Technology’s underwater robotics competition.

“That experience really helped shape the rest of my life,” Humboldt native Eric Stackpole said. “Not only because it taught me about underwater technology, but also because it helped me realize how powerful finding one’s passion can be.”

Now 36 years old, Stackpole’s tinkering has developed into an impressive career that includes a master’s in mechanical engineering with an emphasis in mechatronics, a four-year stint at NASA developing a deorbiting device for the O/OREOS satellite and an expedition to Antarctica where he piloted a remote-operated submarine that helped scientists study under-ice ecology in the Ross Sea.

Stackpole wearing the local garb during his expedition to Antarctica.

“As long as I can remember, I’ve been interested in exploring mysterious places,” he said.

In addition to these achievements, Stackpole also co-founded the underwater robot company OpenROV (now Sofar Ocean Technologies). It was this company that first caught the attention of famed Hollywood director and undersea adventurer James Cameron, who recently handpicked Stackpole to star in and develop gadgetry for his new National Geographic series “OceanXplorers.”

“Maria Wilhelm, who works closely with James Cameron, had learned about the underwater robot company I co-founded during a voyage with National Geographic that my co-founder was also on,” Stackpole said. “Maria was very interested in the work we were doing to make ocean exploration more accessible and she introduced us to James Cameron, who shares the same interests and is also an ocean technology developer.”

One month into taping the series, Stackpole is currently traveling the Atlantic Ocean aboard National Geographic’s scientific research and exploration vessel OceanXplorer on its maiden voyage.

“‘OceanXplorers’ will tell the stories of adventurous explorers, scientists and filmmakers with never-before-used technology as they embark on their mission, tackling challenges that arise from seeking to solve some of the ocean’s greatest outstanding mysteries,” National Geographic announced last month.

Stackpole is one of four crew members that will be heavily featured on the six-part series and will serve as the vessel’s resident engineer.

“I have a background in engineering with particular experience in developing underwater exploration tools in environments with limited resources,” he said. “My role on the show will be to create many of the gadgets and technologies we use during our missions. One producer described the role to me as being sort of like ‘Q’ from James Bond, but for ocean exploration.”

During the expedition, the team will explore the waters in the West Indies, the Dominican Republic, the Azores island chain off the coast of Portugal and the Arctic.

“While my job description is to create the tools to make our expeditions successful, my hope is that I’ll be able to excite people about the process of exploration and developing technology to make exploration possible,” he said. “Most of all, I hope to inspire a sense of wonder for the unknown.”

Despite all of his achievements, Stackpole said that he’s struggled with learning for most of his life and credits his success to his supportive family and some inspirational Humboldt County teachers.

“I’ve actually struggled throughout most of my academic career, but the things one can do with engineering are so fascinating to me that I was able to stick to it,” he said. “When I was a kid at Trinidad Elementary School, I was having trouble with a lot of the material and didn’t think I had much potential compared to other students, but a few good teachers noticed my interests in gadgets and technology and really fueled that fire.”

“Growing up in Humboldt certainly gave me a special feeling of connection and agency with nature and particularly the ocean,” he said. “I spent a lot of my childhood creating my own adventures rather than relying on store-bought entertainment. I think that the strong background in natural sciences that people in Humboldt tend to have, gave me opportunities to gain perspective on how I can play a part in affecting our planet.”

The series isn’t slated to premiere this year, but when it does, OceanX Media and BBC Studios’s Natural History Unit said the show will be featured in 43 languages across 172 countries on the National Geographic channel.