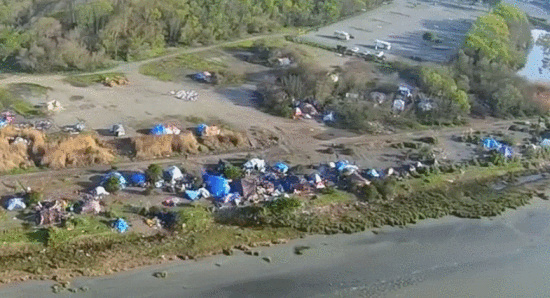 This isn’t the first time local housing activist Nezzie Wade has registered dissatisfaction with the city of Eureka’s plan to empty the homeless camps in the Palco Marsh on May 2. In her role as the president of the nonprofit Affordable Homeless Housing Alternatives, Inc. — a group that wants to build subsidized “sanctuary camps” to house the houseless —  Wade is on-record as opposing the city’s approach to resettling marsh residents.

This time, though, Wade writes on behalf of the Humboldt County Human Rights Commission, which she chairs. In a letter to the county Board of Supervisors, below, the commission asks the board to step in and invoke a “higher authority” to halt the planned May 2 eviction, and adopt an approach to homelessness more in line with AHHA’s own.

Letter from the Humboldt County Human Rights Commission below. A “support document” can be found at this link.

Dear Supervisor Lovelace and Members of the Humboldt County Board of Supervisors,

The HRC is charged with promoting tolerance and mutual respect between all persons, and promoting positive human relationships for the purpose of ensuring public peace, health, safety and the general welfare.

Those living in the Marsh are experiencing an inability to obtain shelter and their health and safety is threatened. The majority of them have disabilities. Many have dual disabilities. The Commission continues to urge the Board of Supervisors to take action immediately and follow through with all items the Commission has recommended above. It is time to take action and to stop ignoring the Commission’s recommendations regarding a Shelter Crisis and to move forward with community partners on affordable, safe, legal alternatives, such as sanctuary camps, safe parking programs and more for the large numbers of homeless in Humboldt. The lack of leadership on issues of homelessness and housing now has resulted in great harm to those most in need among your constituents.