« Highway 299 at Buckhorn Summit is a Lumber-Strewn Mess

GREEN RUSH! Here is a List of the 846 Humboldters and More (So Far) Who are Looking to Go Legit 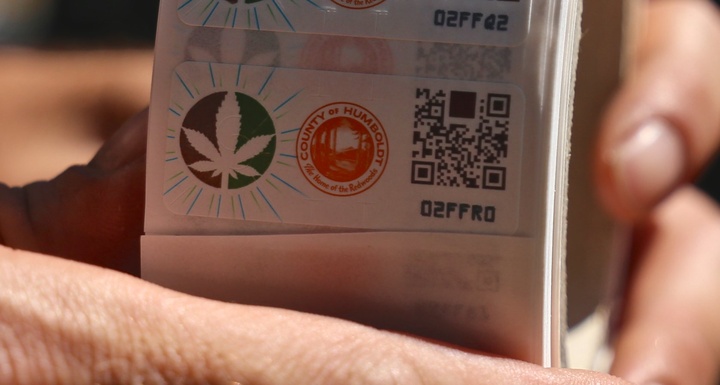 In November, we will almost certainly vote to end marijuana prohibition in the state of California, adding ourselves to the ever-growing list of states and territories where consenting adults can freely toke up, for whatever reason they desire.

But even if Californians fail to approve Proposition 64 this fall, the whole industry built around the fig leaf of “medicinal marijuana” has, over the last year, been rapidly moving out of the shadows and into the light of day. Last October, Gov. Jerry Brown signed a bill that instituted a statewide regulatory regime for all facets of the business – growers, distributors, manufacturers, retailers. Humboldt County followed on this bill in January, passing zoning laws and and setting up a permitting process for growers, who have been tending gardens in the Emerald Triangle backwoods – a convenient place to hide – for almost 50 years.

Many of those growers are not hiding any longer. As of last Friday, and as a key deadline approaches, a total of 846 existing or soon-to-be-existing grows have been registered with Humboldt County’s Planning and Building Department, the county agency that tracks and permits land use in the county – including, now, marijuana farms. Several more have filed for permits for new operations, sometimes for ancillary manufacturing facilities.

The Planning and Building Department compiles lists of these permit applicants and operation registrants, updates them every week and emails them out to a wide variety of interested parties. These lists show that lots and lots of people are looking to get in big on the Green Rush – and they’re not just the hippies in the hills and their heirs.

But you also find names of people you know from other contexts, and likely don’t immediately associate with the demon weed. For instance: Humboldt County Planning Commissioner Ben Shepherd, Humboldt Bay Harbor Commissioner Larry Doss and the Mercer Fraser Company.

Reached at his home Tuesday, Shepherd, a famously conservative voice in McKinleyville politics, told the Outpost that the operation registered to his longtime Dows Prairie home – nearly 15,000 square feet of indoor and mixed-light cultivation – actually belong to a man named Cody Stross. He said Stross was in the process of purchasing his land as he filed his cultivation paperwork with the county, and so Shepherd gave Stross his permission to use his name on the application.

The land, which he had lived on since 1972, has since sold, Shepherd said – and for “an excellent price.”

Mercer Fraser, the Eureka-based construction giant, has applied to build a marijuana processing facility on Glendale Drive, just off Highway 299 between Blue Lake and Arcata. Their application asks for a new 5,000-square-foot building that would be used for “food-based and solvent-based cannabis manufacturing, including but not limited to CO2 and butane extraction.”

Some of the grow ops registered to the county are already fairly famous in their own right. Among them are the storage units at 100 Airport Road in Fortuna. The facility, located just down the street from Rohnerville Airport, has been the subject of numerous raids by the Humboldt County Drug Task Force over the last few years.

But the owner, Neal McKenny – brother and former business partner of Humboldt County Planning Commissioner Kevin McKenny – tells the Planning and Building Department that weed continues to grow in those sheds, and that he is doing some of the growing, and that he wants to go legit. He writes:

Over the past 3 years there have been numerous SB420 Co-Op collective 215 card growing operations at this location. I took over an 80’x50’ from one such Farmer in November 2015 and I have actively worked on this operation since. We want to run a legal medical cannabis indoor grow.

That’s just a selection and an overview, though. You can find links to the full lists below. There are four of them, and they contain fascinating details about the size and scope of the above-board operations that people are planning for the county, along with the names of the people and/or business entities who are planning them. There are a lot of them.

There are four documents here. They list, in order: The operations that have already been permitted by the county, the applications for permits that the county has received, the people that have requested assistance from the county in preparing their applications, and the Humboldt grow ops (or proposed grow ops, in some cases) that have registered their operations with county government. The latter is a step that preexisting operations must take in order to get themselves on the road to legalization, and there’s a deadline for that approaching: August 23. See details here.

NOTE: We have redacted the specific addresses and parcel numbers of the grow ops on these lists because … well, we’re not sure why we’re doing this, exactly. I suppose just because publishing 850-odd street addresses of active grow operations still feels too much like weird taboo juju. The fear of ripoffs is still strong. There is the odd chance that the cannabis cultivators themselves didn’t realize that they were signing up for this when they plonked their names and details down on the counter at the Planning Department, despite the disclaimer to that effect in the registration form itself.

But you should take note, my grow bros and gals: This reality is that this information is already out there, and not difficult to find. The planning department is emailing out full, unexpurgated versions of these lists not only to media but to state regulatory agencies, industry people and, as we saw yesterday, to law enforcement. We know all y’all are sensitive about this kind of information being public – not without reason – but we’re not sure how long we can justify redacting information that is already in widespread circulation. This is what legalization looks like!

CLARIFICATION: Though the main purpose of the “registration list,” below, is — as detailed in the registration form — to show that the registrant’s preexisting grow is “good standing” with the county of Humboldt, it appears that some people went ahead and “registered” potential grows, rather than actual ones.