The city of Eureka’s deadline for homeless people to vacate the Palco Marsh grows ever nearer. Full-scale evictions are scheduled to start May 2 — that’s this Monday, in case you don’t have a calendar handy. This is looking to be a very large-scale police operation, with dozens of personnel on hand to carry out the evictions by force, if necessary. And force will almost certainly be necessary.

This afternoon Affordable Homeless Housing Alternatives, Inc. came back into the picture, announcing that it has answered the city’s call for proposals to house the current denizens of the Marsh. AHHA is the local nonprofit group most often associated with the “sanctuary camp” concept, by which semi-permanent, self-governing camps or villages are set up to house the houseless, at least until more permanent housing is secured for all.

AHHA unveiled a version of this proposal at a public forum last month. City official raised eyebrows at some of the asks back then, and it’s hard to see how they wouldn’t do so again. AHHA asks for three city-owned properties to set up their camps, along with some $150,000 in city money, and doesn’t bow down in the face of city’s hard-and-fast line of a six-month maximum lifespan for such camps. In the press release below, they state that

AHHA responded to the request of an ‘exit strategy’ in the RFP, by stating that as soon as affordable appropriate housing was available, people would then be ready to leave the Villages.

… a version of AHHA president Nezzie Wade’s earlier statement that “[t]he plan is to keep going until we solve homelessness.”

So it seems unlikely that AHHA is likely to get the city to hand over three city parcels and a decent amount of cash when AHHA seems reluctant to bend to the city’s own hard-and-fast deadline. But who knows! With lawsuits flying this way and that, perhaps this suddenly becomes a way to put all of that to rest. We’ll find out what the City Council thinks about it on May 3 — the day after the scheduled evictions — when the council takes up the question of what to do with the people evicted at its regular meeting. 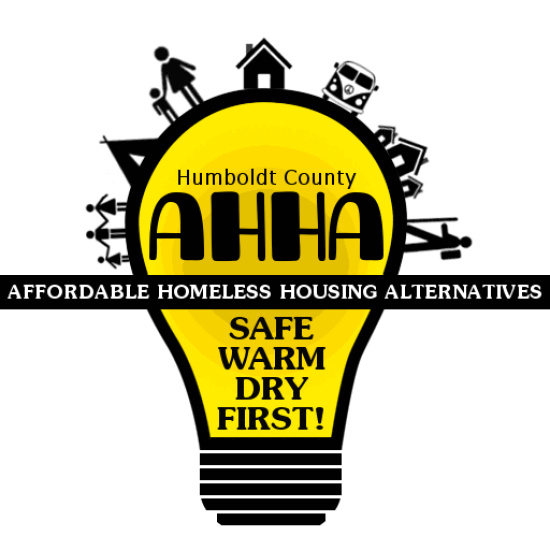 Affordable Homeless Housing Alternatives, Inc. submitted a proposal in response to the City of Eureka’s Request for Proposals before the deadline Friday 4/22/16.  The City is not prepared to respond to the proposal until Tuesday, 5/3/16 at the City Council Meeting.  The eviction of Palco Marsh residents is planned for Monday May 2.

AHHA has requested three city properties for three Sanctuary Camp to Tiny House Villages.  The sites would be available immediately for homeless to move into with their tents, with 30 maximum per site.  Each site would be provided with porta-potties, showers, hygiene stations, and dumpsters.  The community would be co-managed with AHHA and the residents, and formed with a community agreement.  Sites would be supervised by one full time employee who trains volunteers and residents to staff the sites 24/7.

The sites would integrate AHHA’s developed Sanctuary Camp, Safe Parking, and allow the construction of Tiny Houses/detached bedrooms on site, as well as common meeting spaces.  AHHA responded to the request of an ‘exit strategy’ in the RFP, by stating that as soon as affordable appropriate housing was available, people would then be ready to leave the Villages.  The Tiny House Villages would allow residents to develop an equity account to support their move into affordable permanent housing. These Villages would be a logical stepping stone to “Housing First”, using “Safe, Warm and Dry First” now.

The approximate costs per site of 30 people for startup costs and one year of operations is $51,000.

Residents would pay a sliding scale weekly rent, with a maximum of $35/week.

AHHA is requesting Housing Successor Funds, or Measure Z funding for 3 sites that would transitionally house 100 people total, for $153,000.

AHHA notes that their proposal is a benefit both for the current houseless in having a stable place to legally be 24/7. Also, the proposal is a benefit to the larger community in providing direct access for residents to health and human services, creation of safe community, and has proven less expensive than incarceration and emergency room visits.

AHHA welcomes providing further information regarding our proposal to the media and the wider public.