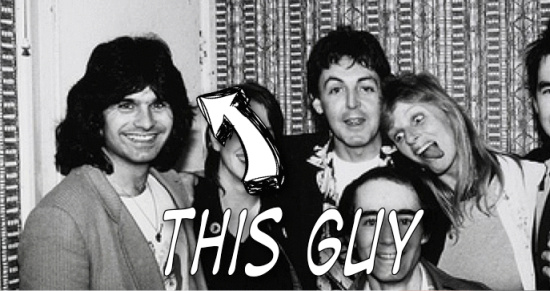 It’s not every Thursday one of Paul McCartney’s old road buddies rolls through Humboldt. But if you don’t mind a trip over Fernbridge you, my friend, can say, “hi hi hi” to a bonafide one-time Wings lead guitarist! Maybe you’re amazed?

Thursday night in The Old Steeple — the beautifully restored former Methodist Church next to the Ferndale Cemetery — English-born guitar magician Laurence Juber will depress you with the level of talent contained in his fingers (Paul knew what he was doing). Yes, ‘twas back in the mid ‘70s when he was but a young working musician in London that Juber caught Macca’s eye and ultimately earned the opportunity to tour the world for three years with the former Beatle until Wings disbanded in 1981. Since then he’s released more than two dozen albums showcasing his fretboard mastery. Sample his dexterity in the YouTube clip below.

More details on that show and others can be had for those who scroll the Lowdown listings below. —AG

MaMuse
The Sanctuary / 8-11 p.m. / $20
With deep roots in the folk and gospel traditions, and their hearts in the present, MaMuse (Sarah Nutting and Karisha Longaker) create uplifting music for the next seven generations to thrive on.

Jazz with Brian Post and Friends
Palm Lounge at The Eureka Inn / 7-11 p.m.
Jazz and dancing.

Heartfulness Meditation
Humboldt State University Founders Hall / 7-8:30 p.m. / $7
In this class you will learn basic relaxation and meditation techniques, and we will explore how meditation can contribute to stress reduction, improved focus and concentration, personal effectiveness, creativity, and happier relationships!
826-3357 / cntract@humboldt.edu / Web site /

Kedi (2017)
The Miniplex at Richards’ Goat Tavern / 7 p.m. / $8 / $6.50 Matinee
This acclaimed new documentary follows seven of Istanbul’s famous street cats, hundreds of thousands of whom have been an integral and respected part of the city since the Ottoman Empire.
630-5000 / Web site /

Karaoke w/ KJ Leonard
Blue Lake Casino and Hotel / 8 p.m.
When selecting your song, please keep in mind your audience would like to dance.
668-9770 / Web site /

Spiritual Support Group
See Event Description / 7-8 p.m. / Free / 18+
Do you have psychic ability or other spiritual; gifts and wanting to talk to someone about it? The Humboldt Spiritualist Support group will listen, offer emotional and spiritual support. Our group’s purpose is to walk beside you during your journey.
601-2940 / humboldtspiritualist@gmail.com /