Man Accused of 2015 Garberville Killing Appears in Court After Being Extradited From Florida; Man Formerly Accused of the Murder Released »

Manila Five in Court: Two Confessed to Plot, Three Have Not — Should Their Cases Be Merged? 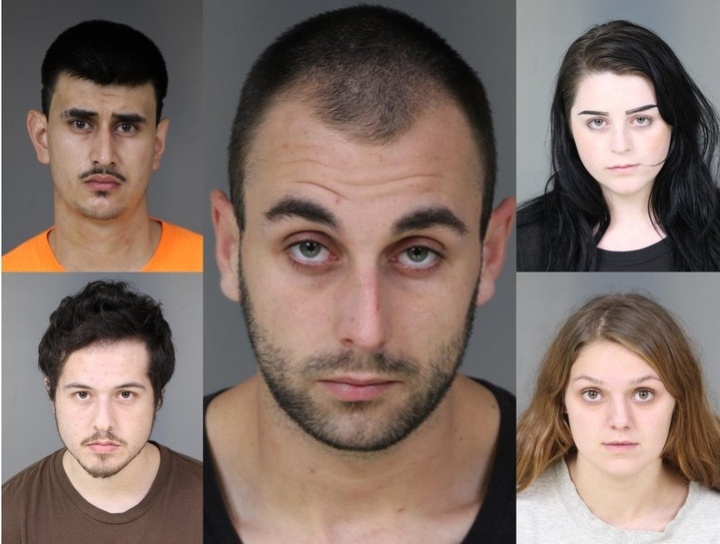 Two of the five people charged with murdering 20-year-old Tyson Eduardo Claros have admitted their involvement and pointed fingers at the other three. But how much of what they said would a jury be allowed to hear?

This morning the District Attorney’s Office asked Judge Joyce Hinrichs to merge the case of Tamara Nicole Thomson and her boyfriend Cesar Octavio Valenzuela with that of co-defendants Catherine Suzanne Lynn Fode, Hector Godoy-Standley and Brandon James Mitchell. All are charged with the Dec. 12 armed carjacking that ended with Claros shot multiple times and left dying on state Highway 255. At this point, two separate cases are winding their way through the courts.

Deputy District Attorney Luke Bernthal, arguing for the cases to be joined, said the prosecution is aware of potential issues over the so-called “Aranda Bruton’” rule. It limits how much, if any, of a co-defendant’s incriminating statement can be used in court. But he said his office believes the cases should be heard together.

“This is one murder and one conspiracy.”  Bernthal said.

Those who confessed their involvement are Thomson, 18, and her boyfriend Valenzuela, 21. Both said there had been a plan to punish Claros for molesting Mitchell and Fode’s 3-year-old daughter. Mitchell, Fode and their alleged cohorts were apparently unhappy that Claros was never charged with a crime. According to Claros’ family, the molestation allegation was investigated but no reliable evidence was found.
Thomson and Valenzuela admitted to investigators that they participated in the fatal plot, which began with Thomson convincing Claros she needed a ride from Eureka to McKinleyville.  The driver, Brittany Boyd, was a friend of Claros, but a stranger to all five suspects. Boyd is apparently the only independent eyewitness, and she was only able to identify Thomson.

This morning Judge Hinrichs pointed out that the prosecution filed the motion to join the cases on Jan. 9, and she has received no written opposition from any of the defense lawyers.

Celli responded that the defense is “hamstrung” because the district attorney has turned over so little discovery, or evidence, in the case. Outside the courtroom Celli said that “based on the state of discovery (the motion) is premature.”

The prosecution handed over two small packets of evidence this morning.

As of now two separate preliminary hearings are set for February. Hinrichs told lawyers to have any written opposition to her by Jan. 31.