HSU Football Program to Be Axed After 2018 Season 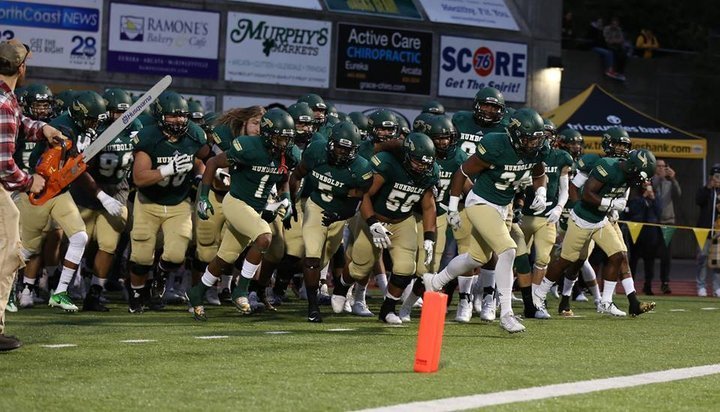 Humboldt State University will discontinue its football program after the upcoming 2018 season. The move was announced earlier today, after coaches and players were informed.

President Lisa Rossbacher described it as an unfortunate, but necessary, step in addressing the University’s structural deficit and protecting HSU’s core academic mission. She also emphasized her commitment to HSU’s Athletics Program remaining in Division II of the NCAA and said that the timing of the announcement would provide football student-athletes maximum opportunity to consider future options.

Discontinuing football will bring a conclusion to a program that began shortly after the University’s founding and which has enjoyed many successes. It has had standout stars and some players, most recently Alex Cappa, made the leap to the professional level. Games at the Redwood Bowl have been highlighted by a strong community atmosphere.

“Our football team has been an important source of pride for our students, staff, and alumni, as well as our regional community,” President Rossbacher said. “Sadly, and despite a tremendous fund drive effort, we found that football cannot be sustained through student fees and community giving. At the same time, the University cannot continue to subsidize budget deficits in Athletics without threatening our academic programs.”

The announcement was consistent with President Rossbacher’s decision last fall that the football program could only continue with significant private support.

A fund drive, led by a passionate group of boosters, showed some promise that the program could be funded through community support and additional University investment. A goal of $500,000 in “net new” private support by January of each year was established, with HSU committing to match. However, even with the timeline extended through June, the total amount collected was $329,000.

“I want to extend my sincerest thanks to members of the community who led the fund drive and everyone who offered their financial support,” President Rossbacher said. “I believe the fund drive demonstrates that this decision did not come quickly or lightly, as we considered many factors and evaluated various alternatives. Ultimately, we had to halt the growing budget deficits in Athletics and prevent these deficits from threatening our core academic mission, as well as preserving our Division II standing and conference affiliations.”

Coaches and players were informed shortly before the announcement was public.

HSU will honor scholarships for eligible players through the 2018-19 academic year, and coaches and staff will also help players contact other programs. At the end of the season, players will get a full release, which means they could choose to play at another institution. In most cases, they could choose to compete for HSU this year, and then transfer and compete for another institution next year.

The players are being offered academic and financial advising, and they will be able to utilize the tutoring and other support services offered through Intercollegiate Athletics for as long as they’re students at HSU.

“I trust the consultative and analytical process that President Rossbacher undertook in coming to this conclusion, and I fully support her in making this difficult but necessary choice,” said CSU Chancellor Timothy White.  “I understand the benefits that participating in athletics provides to our student athletes and unfortunately, while this outcome is fiscally prudent, it will be unpopular in some circles. As HSU president, she is tasked with making decisions that are in the best long-term interest of the core mission of the entire university, and this is one such decision.”

The decision to discontinue football was driven by budget challenges at the University level and deficits within the Athletics Department. HSU is in the midst of a two-year effort to reduce spending by $9 million and achieve a balanced budget by the 2020-21 academic year.

Within Athletics, football is the most expensive program, with a net cost of about $1 million. Last year, the University covered a deficit in Athletics that had reached $750,000, up from $250,000 three years ago. This is consistent with national trends. According to studies conducted by the NCAA, expenses in university athletics programs have grown more quickly than university-wide expenses overall. At HSU, the rate of cost increases in the Athletics Department has been roughly double that of the University.

In addition to football’s high net cost to the University, HSU is required to have 10 sports to remain eligible for NCAA Division II competition. To remain in the CCAA, HSU’s primary conference, the 10 sports are required to be chosen from a specified list, and football is not included on that list.