Dinsmore Man Pleads Guilty to Wrecking the Environment for His Megagrow; Could Face Four and a Half Years in the Clink, DA Says »

These properties — an apartment building at 1625 G Street and a boarded-up home at 1635 G Street in Eureka — are the subject of a series of small claims cases against Floyd and Betty Squires. | Photos by Ryan Burns.

A group of more than 20 Eureka neighbors filed into Courtroom Four of the Humboldt County Courthouse this morning, just like they’ve done most days for the past three and a half weeks.

“I’m gonna miss you,” one of them said half-jokingly to the bailiff holding the door.

“I’m gonna miss you!” the bailiff responded enthusiastically. “I’m dead serious about that.”

The neighbors are all plaintiffs in a consolidated small claims case against notorious local landlords Floyd and Betty Squires, who shuffled into the courtroom behind them and took a seat at the defendants’ table.

Per the rules of small claims court, the parties have all represented themselves in court, calling witnesses, testifying and cross examining. The case, which has spread across 17 court days encompassing more than 50 hours of testimony, concerns two of the Squireses’ many properties, 1625 and 1635 G Street in Eureka. Witnesses have included building inspectors, Eureka Police Chief Andy Mills, the court-appointed receiver of numerous Squires properties and more.

The 21 neighbors who remain litigants in the case — down from 43 at the beginning — allege that the Squireses have failed to properly maintain the properties, allowing them to deteriorate into a state of blight and a haven for criminals and vandals.

Members of a community group called the Westside Community Building Initiative Program were already up in arms over problems in the neighborhood when a man was shot inside the vacant Squires-owned house at 1635 G Street in December. Soon thereafter the group’s director, Heidi Benzonelli, helped neighbors come together to file a series of small claims lawsuits against the Squireses. They’re seeking $10,000 apiece in damages.

Daniela Vargas of the Westside Community Improvement Association, an interested spectator, drew illustrations throughout the trial. This was her depiction of Floyd and Betty Squires. She drew Betty as a snake, she said, because Betty didn’t speak audibly throughout the trial, only whispered into her husband’s ear.

Floyd Squires took the witness stand this morning and answered a few questions from a series of neighbors, who took turns walking up to the prosecution table to levy their queries. Sitting hunched before the microphone, Squires was terse and evasive. One neighbor asked him to refer to a graph regarding decreased property values around abandoned properties. Squires flipped to the appropriate page in a packet of papers but said he didn’t know what he was looking at.

Another neighbor asked him why it took so long, nearly 11 months after problems arose, for the Squireses to hire a caretaker for the property. Squires responded that he didn’t remember problems dating back that far. Asked why vagrants funneled to his property and caused it to “look like a tornado hit it,” Squires responded simply, “I don’t know.”

Before long the neighbors were out of questions and it was time for closing arguments. Squires told Judge Cissna that he’d prefer to present a closing argument in writing in three days’ time, but Cissna wasn’t having it. “No,” he said.

“We’re wrapping this up this morning,” Cissna told him. “You’ve known this was coming. … This isn’t a big surprise.”

Another illustration by Daniela Vargas.

Five of the neighbors volunteered to make closing arguments, agreeing to limit their total time to under 15 minutes. First up was a man named Richard Chase, who said that while he understands the right of landlords to make money, the Squireses “don’t step up” to their responsibilities and instead allow “drug dealers and vagrants” to create fear in the neighborhood.

Floyd and Betty Squires have shown “the deftness of a ninja” in avoiding mail and other communications, Chase said, and Floyd in particular has “reinforced his reputation of being an evil slumlord,” he said.

Next up, Ron Kuhnel said the case was about one simple thing: the defendants’ “absolute failure to maintain their property.” The buildings in questions are a “disgrace,” he said, and the Squireses have demonstrated a pattern of doing as little as necessary to squeak by.

This Vargas illustration depicts some of the conditions at a Squires property described in court, conditions including an umbrella hanging from a lightbulb to catch water from a leaky bathtub upstairs.

“Mr. Squires,” she began, “this court experience has been exhausting and yet I remain hopeful that something positive will come out of the 50-plus hours I have just endured over the past three weeks having to sit here and be exposed to some of the most disturbing antics I have ever witnessed by a grown man.”

She went on to lambast Squires for his alleged mismanagement of the property and said she was “deeply insulted” by his claim that she and others had signed on to the case merely in hopes of winning $10,000.

“I could not care less whether or not I ever receive a penny from you or your wife,” Regalo said. “What I want is for you and your wife to be held accountable for your inability and unwillingness to manage your property competently,” she said.

Regalo wrapped up with this:

I also want you to be held accountable for your blatant disrespect of my time and intelligence throughout these last three weeks. If there is one behavior that I have absolutely no tolerance for it is lying, or the omission of the truth, and I am still in disbelief at how easy this comes to you.

As a matter of fact, your unprofessional and self-centered behavior during these past few weeks has really shed some light for me on why your properties have declined to the state they are currently in.

In closing, it’s now clear to me you have been operating your entire life on a very different plane than I am on. Yours is a world void of truth, reality and concern for other people, and that makes me feel sorry for you. 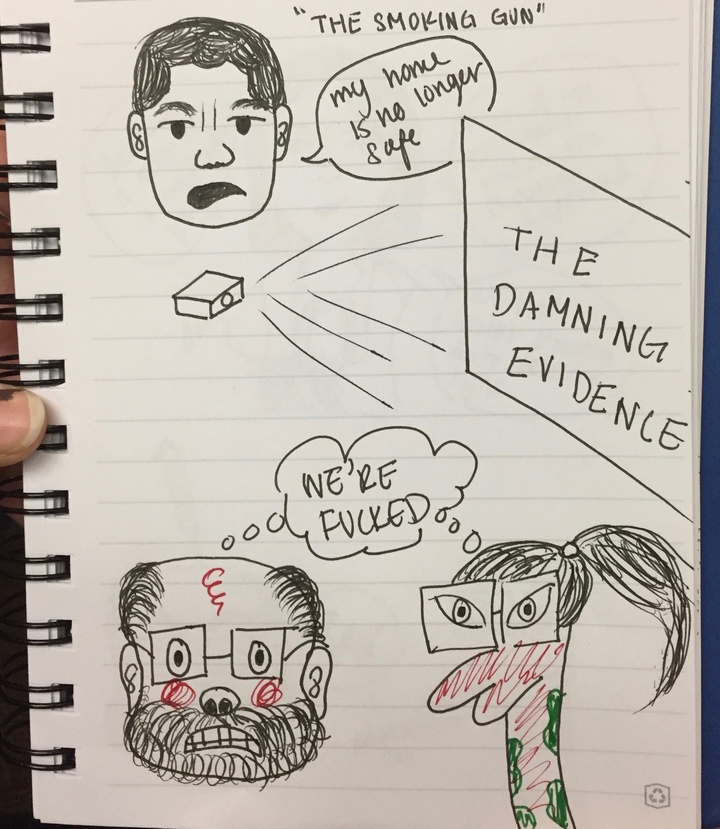 Vargas said her illustrations got a bit more vulgar as the trial wore on due to her frustration.

After this pointed rebuke, Floyd Squires launched into his own closing argument, with his wife sitting quietly by his side. He said there had been a lack of evidence and a lot of talk over the course of the case, and he recounted some of his long history in property management.

He referred vaguely to testimony from former Humboldt County Planning Commissioner Jeff Smith, who serves as the court-appointed overseer for a number of Squires properties that were placed into “receivership” pending repairs required by a judge. Squires also alluded to “friction in the [Eureka] Building Department” as a contributing factor to “some of these things.”

Squires defended his tenants as “very nice people” and attributed the damage at one property as the work of vandals and “people off the street.”

“They called us evil slumlords,” Squires said. “I’m sorry about the rhetoric, but we’ve been in this business for many, many years.”

He went on with scattered references to inspections, work permits and a request for police assistance. At one point he said, “We take great pride in our property throughout the community,” prompting incredulous exclamations from the neighbors in court.

Squires finished by asking Judge Cissna to deny the requests for damages.

With the closing arguments concluded, Cissna said he would issue a written ruling, though he warned that it “will take some time” given his current caseload.

Afterward the group of neighbors crowded into a conference room, commiserating like good friends.

“All the neighbors have bonded,” Kuhnel said. “They know each other like they never did before. That was a fringe benefit.”

Little eddies of conversation swirled in the room as the neighbors recounted bits of testimony and the closing arguments. Benzonelli spoke up and asked for everyone’s attention.

“I have done community-building, but I have never, ever seen a community come together like this,” she said, prompting cheers. She recalled going door-to-door with fliers last year, asking people to show up at a community meeting. That’s where the seeds of this legal action were sown.

Eureka’s Third Ward councilmember, Kim Bergel, was in the room. She’s been following the case and supporting the neighborhood group. “I just want to say how impressed I am by you guys,” she said. “Your vigilance, your dedication to your neighborhood is outstanding. It’s amazing. And, honestly, I think you’re going to set a precedent, because people feel like they’re powerless, and we’re not, clearly.”