« Eureka’s Homeless Container Village Has Moved to Its New Location

MCCLAIN TRIAL, DAY FOUR: What Does ‘Get Down’ Mean? Testimony Closes With Dueling Expert Testimony 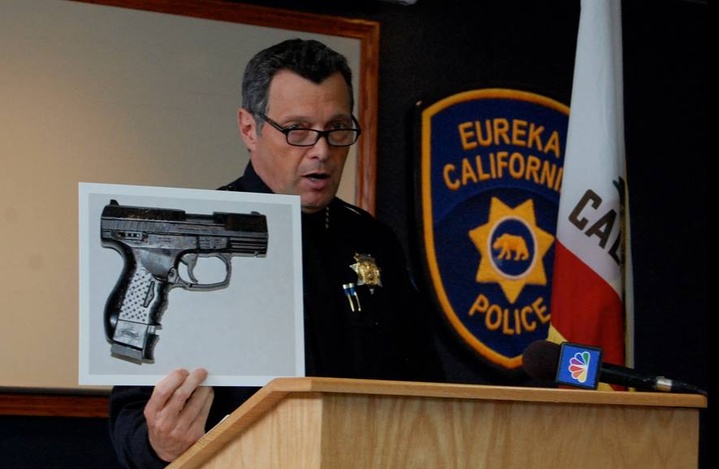 At a press conference following the shooting, Eureka Police Chief Andy Mills holds up a photo of the air gun in Tommy McClain’s possession when he was shot. File photo: Andrew Goff.

Depending on which expert witness jurors choose to believe, Eureka police officers either completely bungled the operation or acted like pros and did everything right.

Testimony ended today in the federal wrongful death suit filed by the parents of Tommy McClain, the 22-year-old Eureka man shot dead by police on Sept. 14, 2014. Closing arguments are set for Friday morning, and the case will then go the jury. Did police use excessive force or not? Were they negligent or not?

The plaintiffs’ expert says Officer Stephen Linfoot over-reacted and fired for no good reason. The defense expert says Linfoot had no other choice, unless he wanted to risk being shot or having his partners shot.

Roger Clark, testifying on the McClain family’s side, said officers should have taken cover rather than walking right up to the sidewalk of McClain’s Allard Avenue home. McClain was standing near the front porch in the glare of a police spotlight. Officers knew or suspected he had a semiautomatic pistol stuffed in the waistband of his jeans.

Clark said if officers would have hidden behind a car, for example, they could have spoken to McClain without risk to him or themselves.

“Misunderstandings can be cleared up,” Clark said under questioning by plaintiffs’ attorney Dale Galipo. “Commands can be given.”

For example, officers who had cover could have said “Stay where you are. Don’t move. Keep your hands up,” while staying in safe place. Instead, Capt. Brian Stephens walked up to the sidewalk and started ordering McClain to “Get down here right now.”

Clark said he believed police ramped up the situation instead of trying to calm it.

“In my view it was a continued escalation, right up until shots were fired,”  he said.

Clark is a retired Los Angeles Sheriff’s Department lieutenant who often testifies as an expert witness. In Los Angeles he supervised a special team that made 2,500 arrests over about five years and never fired a single shot. Over about 20 years he has testified as an expert witness in about 950 cases, most of them involving the use of lethal force.

Clark said Eureka officers made a serious mistake by telling McClain to put his hands up and “Get down here” to the sidewalk. Instead, he said, they should have told him not to move at all. Once the situation was stabilized, they could have proceeded.

McClain had begun walking toward officers, which Clark said showed “a willingness to comply.” But McClain once or twice lowered his hands, as multiple officers were shouting commands.

“If he’s not doing exactly what they expect, that should have been taken as confusion generated by the commands,” Clark said. “He can’t be held responsible for that.”

A key issue in the case is whether McClain interpreted the last words in the police audio recording, “Get down,” as a command to literally get down on the ground. A split-second after those words the lethal shots were fired. Was it just “Get down” or was it an interrupted command to “Get down here” as in “Come down to the sidewalk.”?

After McClain was killed, police pulled the gun from his pants and discovered it was an unloaded pellet gun.

Capt. Brian Stephens, recalled to the stand to testify for the defense, said his original intention was to “to have as casual a conversation with him as possible because I didn’t want to escalate the situation in any way.” But then Linfoot, summoned by other officers, arrived on the scene to help. Shortly afterward McClain allegedly went for the gun, and Linfoot fired seven times. McClain was hit by three bullets. One entered his right bicep, exited his inner arm and entered his chest. That bullet lodged in his spine and would have instantly paralyzed him.

Another round struck his right temple and destroyed his brain. A third struck him in the buttocks, either because he had turned around or was already lying on the ground facing away.

Alexander Jason, a crime-reconstruction expert called by the defense, said McClain’s upper right arm must have been in contact with his chest when that bullet hit. That would bolster the claim that McClain’s arms were down and he was reaching for the gun. Attorney Galipo also has suggested that his arms were down because he was trying to obey a command to get on the ground. And eyewitness Nichole Mottern, McClain’s housemate, testified that McClain’s arms were out to the side and his hands in plain view when he was gunned down.

Defense expert Don Cameron, who currently trains police officers in Contra Costa County, Napa and Sacramento, strongly disagreed that officers should have waited for McClain to get his hands on the gun.

“It’s not appropriate to wait,” Cameron testified under questioning by defense attorney Nancy Delaney. “You can draw a gun in about a second and get a shot off … if I wait until the gun is drawn from the waistband I’m trying to catch up.”

Cameron also had no problem with Linfoot continuing to fire while McClain was falling and after he hit the ground, because there’s no way of knowing whether the person is really mortally wounded. He could still pull the gun and fire, Cameron said.

As for different officers yelling commands, he said that is reasonable if the commands are similar.

Under questioning by Galipo, Cameron testified he wasn’t troubled by the final command of “Get down” heard on the audio recording.

“He’d been told to ‘Get down here, ” Cameron said.

“Did you ever consider that he lowers his hands to get to the ground?” Galipo said.

“Because he went for the waistband.”

“That’s what the officers say. That’s not what the witness (McClain’s housemate Nichole Mottern) says.”

Both attorneys were careful to point out that the opposing side’s witnesses were paid for their testimony.